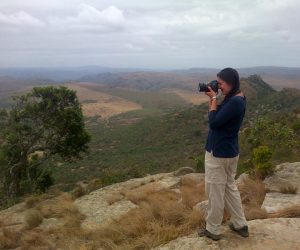 *Ithala Game Reserve is one of several sites for our unique Leopard Survey project. Our leopard team moves across a few reserves throughout the year spending two months at a time on each.

Ithala Game Reserve is situated near Louwsberg in northern KwaZulu-Natal, South Africa, rolling down from the Ngotshe Mountains into a deep river valley it is characterised by incredible ancient rock formations. Ithala boasts a wide and diverse range of habitats and landscapes, characterized by deep filled valleys and gorges, clear streams cascading over waterfalls into deep pools, and expansive grasslands. These grassy plateaus are home to a wealth of plains game such as Blue Wildebeest, Tsessebe and Red Hartebeest.

Ithala’s big game species include White and Black Rhino, Elephant, Buffalo with numerous giraffe, zebra, blue wildebeest and a wide variety of other antelope. There are no African wild dogs or cheetah on Ithala.

Seldom seen predators at this KwaZulu-Natal game reserve in South Africa include Leopard, Spotted Hyena and Brown Hyena. After years of near extinction from this area, Redbilled Oxpeckers were reintroduced to the reserve and these birds can now be spotted at Ithala.