It was approximately eight weeks ago that Hluhluwe-Imfolozi Game Reserve lost 12 members of the Crossroads Pack to the Canine Distemper Virus. After this tragic incident took place, Ezemvelo KZN Wildlife, Wildlife ACT and the Endangered Wildlife Trust (EWT) came together to strategize a plan going forward. One of the immediate outcomes of this meeting was to inoculate Dela’s Pack. This is the pack that (until recently) shared a territorial boundary with the deceased Crossroads Pack.

The vaccine being used is called the Recombitek Canary Pox Vaccine. For this to work, an African Wild Dog needs the primary inoculation followed by another “booster” six weeks later. As it stands, we have recently proceeded with the second round of inoculations, which will hopefully help to prevent future outbreaks of Canine Distemper Virus. 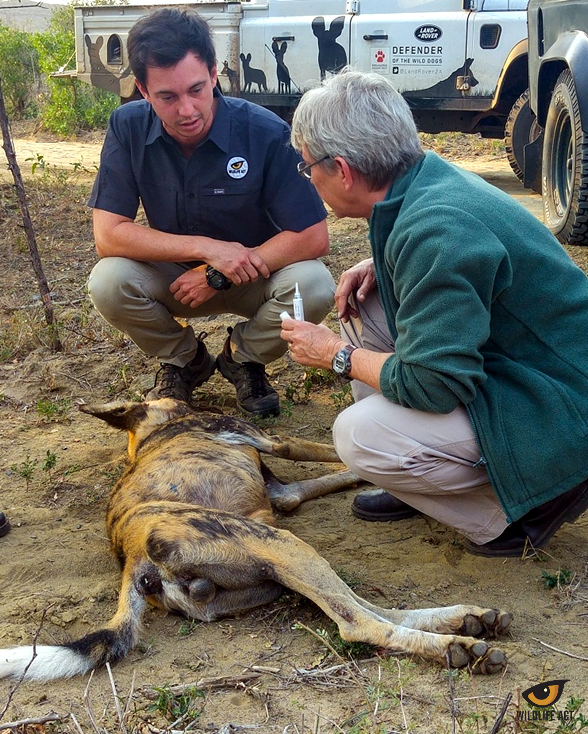 Although the focus has been on Dela’s Pack, we are continuing intensive monitoring of the remaining five African Wild Dog packs that reside in Hluhluwe-Imfolozi Game Reserve. To date, no further signs or symptoms of Canine Distemper Virus have been noted.

While it has been a time of tragedy for the African Wild Dog population (and subsequent operations have been timely and at high cost) there has been overwhelming support from all parties involved. We would like to extend a special Thank You to all those that have shown their support.

What is Canine Distemper Virus?

Canine Distemper is a highly contagious and serious viral illness with no known cure. The disease affects domestic dogs and certain wildlife species. Canine Distemper belongs to the Morbillivirus class of viruses. It is a relative of the Rinderpest virus that affects cattle and is in the same family of viruses that causes measles, mumps, and bronchiolitis in humans.

In canines, Canine Distemper Virus impacts several body systems, including the gastrointestinal and respiratory tracts and the spinal cord and brain. The viral infection can be accompanied by secondary bacterial infections and can cause serious neurological symptoms.