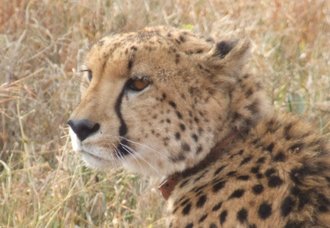 Since the last update in January we are happy to report the new cheetah have settled in well. Initially they were making large movements across the reserve to orientate themselves and establish future home ranges.

Our current volunteers, Becky, Stephane, Wade and Kalley have recorded locations of them on a daily basis, but have yet to see them associate with other cheetah on the reserve.

Some exciting news is that while monitoring we have been fortunate enough to find a resident uncollared female who has a number of cubs – confirmation that the Mkhuze population is doing well!

We hope that the resident males on Mkhuze will seek out and mate with the two new females and grow the population even further. We will continue to monitor these two females on a daily basis to establish how their settling process continues and record at what stage they start socialising with the resident population.

Wild caught females and captive bred male wild dogs are currently being bonded on Tembe Elephant Park, with the fence between the two group’s enclosures due to come down within the next two weeks!