It’s not everyday that our conservation volunteers are involved in a hands on rescue mission. But – when the team at Zimanga Private Game Reserve (South Africa) heard the panic stricken squeals of a little warthog stuck in the electric fence it was all hands on deck!

Belly deep in a muddy puddle, snared in a fence by head and front trotter, with an electric wire across its rump – is – by no means an acceptable situation for any young warthog to be in…

Assessing the situation Coenraad (the monitor at Zimanga) closely followed volunteers (Philip Dempster, Wynne Brown, Christian Pfund and Marian Sabety) were at the aid of the increasingly terrified youngster.

Now, being ankle deep in a muddy puddle trying to extract one young – panic stricken – warthog snared in an electric fence is by no means an acceptable situation for any monitor to be in either! But this is Africa and sometimes these things have to be done…

So, you can imagine the amusement for onlookers as the drama unfolded….  The epic tussle between monitor, warthog, electric fence and muddy puddle began. After what probably seemed like a shocking amount of time for all parties involved the little warthog was free – bolting off into the bush tail firmly curled down – squealing disgruntled forms of gratitude back to the team!

This little warthog will definitely sleep well tonight, as I am sure will Coenraad! 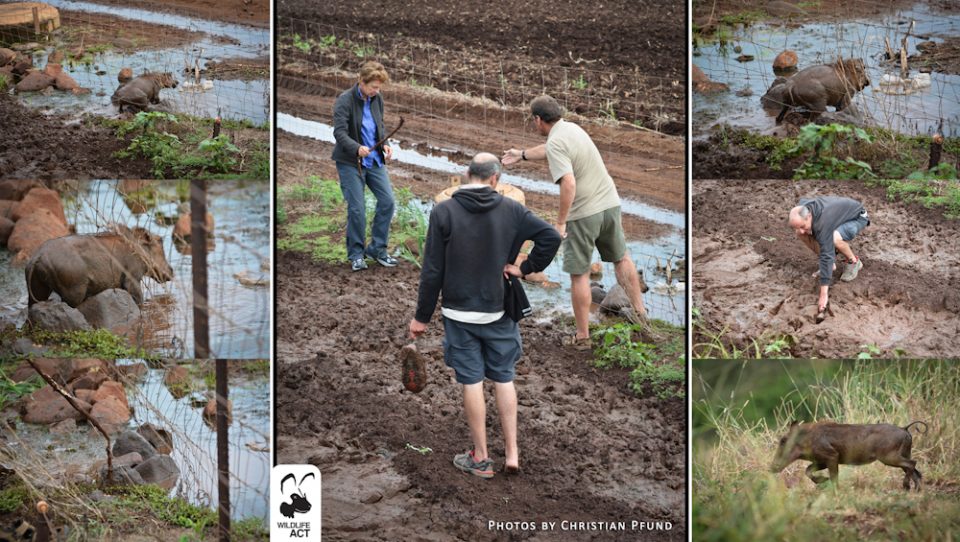