Two weeks ago, during the last pick up/drop off of the conservation volunteers, I met Lisa. She gave me the heads up that she would be coming to Mkhuze Game Reserve after spending two-weeks at one of our other projects in Zululand.  She mentioned that her birthday would be celebrated whilst in Mkhuze and at the time, she insisted that we would need to find a Cheetah on her birthday as she had not seen one in the wild before. Without thinking much of it, I agreed to these terms and conditions. Two weeks later, Lisa joined us at Mkhuze Game Reserve and I was reminded of her African birthday wish… However,  I got a bit worried as although we knew where the Cheetah were, we hadn’t had visuals on them for four weeks. After biting my tongue, the rest of the conservation volunteers and I came up with other various ways of celebrating Lisa’s birthday!

On the morning of her birthday, Lisa was surprised with a birthday cake and balloons that Louise, a fellow conservation volunteer, had prepared the night before. She had the opportunity of admiring it and blowing out her candles before packing it up for our tea party that we had organized at one of the hides in Mkhuze Game Reserve. We figured we could fit in a tea party after finding the Wild Dogs but before finding the mysterious Cheetah that was proving to be a challenge to find!

Once the Cheetah ‘hunt’ had started, the rain picked up and the mood dropped and unfortunately the Cheetah mission came to a standstill. We decided to head back to camp and out of nowhere, three Black Rhino were spotted in the space of three minutes. Lisa got slightly emotional and was grateful as she said that these sightings were a great birthday present but I had made a promise and felt bad nonetheless. 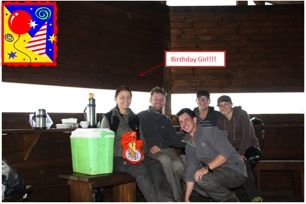 The following morning we set out to find the Wild Dogs and not long after we found them, we got a call that not one but four Cheetah had been sited at a kill. We raced over there to find a mother and three yearlings at a kill with 35 vultures circling in the air above. So although it was a day late, Lisa got her birthday wish and she has been walking on clouds ever since. She came to Africa to see the Black Rhino, Wild Dog and Cheetah and she said that she can leave now and keep that smile on her face for a long, long time. 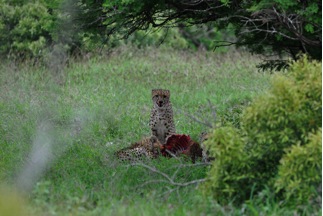