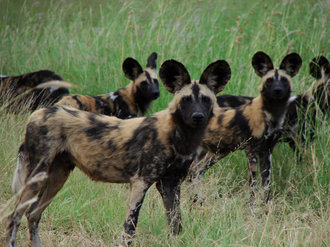 There’s good news for the painted dogs on all four reserves. They were seen mating in February and March and we’ve got litters of healthy pups on three of the reserves. The alpha females on Thanda, Mukuze and Hluhluwe-iMfolozi are still denning but we’re hoping to catch a glimpse of the little ones in the next couple of weeks.

Two sub-adult painted dogs (one male and one female) were darted and fitted with collars on Thanda Private Game Reserve. The collars will assist with the monitoring process especially if either of them disperse. In the last three months Thanda’s pack of eight painted dogs have spent more time outside the reserve than in it! They’ve been seen on the Mduna Royal Reserve as well as on Zululand Rhino Reserve (ZRR). Two of the males seem to have dispersed in the process, as they are no longer with the pack. They’ve been seen a number of times on ZRR in good condition but we haven’t been able to relocate them back onto Thanda.

Three male painted dogs were moved from Hluhluwe-iMfolozi Park to Tembe National Elephant Park in March. The aim was to unite the males with Tembe’s main pack that consists of six dogs. The alpha pair mated and the pack seems healthy and stable. The monitoring changed focus to lion work as It was agreed to give the painted dogs space and time to settle and den in preparation for the pups.

At the end of January, Mkhuze Game Reserve suffered yet another tragic loss when a female painted dog was killed by a poacher’s snare.  Another female was treated for a haematoma on her face, which has since healed well. A totally different female had a snare removed from around her neck (the snare had fortunately been caught by the anti-snare collar, which prevented it from killing her). In March the pregnant Alpha female had her back leg caught in a snare and it had to be amputated. The Mkhuze pack now has two females with three legs, as a result of snares. Despite the tranquilising drugs and the obvious trauma of losing a limb, the alpha female’s pups have survived and are in the den. This just shows that constant monitoring is essential for all the painted dog packs on the reserves we work on.