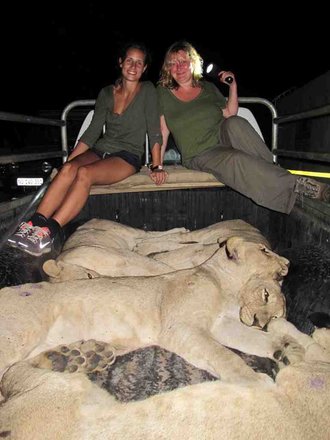 During the course of 2011, eight Lions were captured for relocation on Tembe National Elephant Park (6 females and 2 males). The first four were moved to Makalali Reserve and the second four went to Zululand Rhino Reserve.
4 Lions were fitted with tracking collars in Tembe National Elephant Park this year (one of which was a GPS collar that has given us excellent data for a Lioness that is very rarely seen.)
6 young Lions were micro-chipped, allowing us to officially have them on our records. We now only have 8 out of 38 Lions on Tembe National Elephant Park that have not yet been micro-chipped.
Collars that were fitted on 2 sub-adult Lions in 2010 were loosened, to accommodate the lions’ physical growth, and Tuberculosis (TB) samples were taken from 10 individual Lions to help with a TB study being done by a veterinarian in Pretoria.

Our Wildlife ACT team and conservation volunteers also assisted with the branding of 4 Lions in Hluhluwe-iMfolozi Park (HiP), to allow individual identification for future data collection through monitoring, and assisted Thanda Private Game Reserve’s management with the capture of 2 Sub-adult male Lions that were placed into a holding enclosure (boma) prior to their relocation.

The data made available by the Wildlife ACT team through continuous monitoring throughout the year was pivotal to all of the above management decisions.