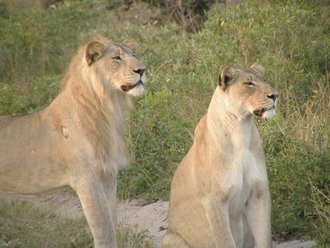 The main concern for the Tembe Wild Dog pack is the large Lion population on the reserve; in the past, interactions between the two species have resulted in at least 2 of our Wild Dog mortalities. However, it appears the dogs are learning to deal with these pressures more effectively.

On the evening of 21 October 2011, the wildlife monitor and two conservation volunteers were watching the Wild Dog pack in the north-eastern section of the reserve. The pack had settled down for the evening, so the team was about to leave; but as the vehicle engine was started, 3 Lions walked into the clearing that the dogs were sleeping in. The dogs immediately gave the necessary warning bark and ran off – at the same time making sure all five of the puppies were safely ahead. It appears their 9 months of freedom have improved their lion avoidance tactics.