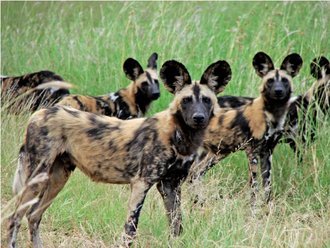 Today a pack of Wild Dog were released on Tembe Elephant Park. Wild Dog have not been naturally resident in the Tembe area for approximately 100 years, and this release marks their return. This reintroduction is a major milestone in the conservation efforts of this species. The pack to be released consists of 4 males, 2 females and 8 puppies.

Interestingly the males are actually a group of capture-reared animals, meaning the females which they have been bonded with will need to teach them how to hunt. This technique of bonding capture-reared animals with wild-caught Wild Dog has been successful in the past and is how the recently released Wild Dog pack on Mkhuze Game Reserve was formed. The males in the Mkhuze pack have since been very successful at hunting and are ‘pulling their weight’ in the pack.

Ezemvelo KZN Wildlife recently made the decision to release this pack onto Tembe, balancing the predator-prey dynamics to include these super-predators. With other large predators including Lion and Leopard the suite of predators on Tembe makes for an exciting visit! From a biological perspective the large prey abundance on Tembe will easily be able to support this pack and hopefully ensure the breeding success of the pack, allowing Tembe to contribute to Wild Dog conservation in the country. With approximately 450 Wild Dog in South Africa, this will be a valuable contribution to the conservation success of this endangered species.

Wildlife ACT conservation volunteers, along with Wildlife ACT monitors Chris Kelly and Cilla Pickering, are assisting EKZNW in the release and post-release monitoring efforts of this important Tembe pack. The pack will be released from their boma (holding enclosure) by being enticed out with suitable bait. It is vital during the first few months after they have been released to follow the pack to ensure that they are not moving outside the borders of the park and that they have made Tembe their home.

To find the pack easily, a few select individuals have been fitted with ‘state of the art’ VHF collars, allowing Wildlife ACT volunteers and monitors to locate them. This will form part of the priority species monitoring work which is being conducted on Tembe, which includes the elusive Suni antelope, Elephant, Black Rhino and Lion. Keep posted for news and photos of the release and how the pack progresses in the coming months.