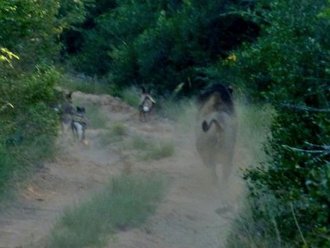 Our monitoring team in Tembe Elephant Park have been kept on their toes with a busy schedule of tracking the pack of Wild Dogs that were released onto the reserve in January. Wildlife ACT participated in a Wild Dog call-up during March, during which the team managed to collar an additional male dog in the pack. The new collar is giving a much stronger signal than the other collars, which is important on a reserve like Tembe with limited road access.

On the 17th March, one of the males from the Tembe wild dog pack (‘George’) was found in a coma. He was brought back to camp, so that the vet could administer a drip and keep him under constant watch. After establishing that it had been a severe head trauma (probably a kick from a zebra or a giraffe) that had caused the coma, the vet made the difficult decision to put him down. Any recovery would have been limited and he could never have survived in the wild.

This month we have further sad news. Wildlife monitor Cilla and our Wildlife ACT volunteers had been watching the Wild Dog pack playing on the road, when a large Lion burst out of the bushes, surprising the pack and chasing them down the road. The Lion must have bitten one of the male Wild Dogs, because the team found his body about 1km from the scene an hour later. It is a sad time for those who have spent time with this Wild Dog (‘Lennon’), however the pack has now had a very real experience with lions and we hope that they will be more vigilant to this threat in the future.

Both incidences, although sad, were natural deaths for the animals involved, and not caused by poaching or any other human interference. The rest of the pack are still doing well, and although two male dogs have been lost, the Alpha male is still dominant.

Our team will continue to monitor them and we will keep you posted.