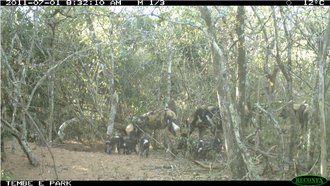 The Wild Dog pack that was released on Tembe Reserve in January, has just produced a litter of puppies. Our monitoring team has counted 6 puppies, seen emerging from the den last week. This is very exciting news but also a dangerous time for the pack given the Lion populations on Tembe.

The Tembe pack have also lost 2 male Wild Dogs since the beginning of the year, one from what was confirmed in post-mortem to be encephalitis, and the other dog killed by a Lion in a predator-conflict situation. Both incidences, although sad, were natural deaths for the animals involved, and not caused by poaching or any other human interference. Our team will continue to monitor the pack and the new pups, and will keep you posted.