It’s come to the time of the year where fires are sweeping through game reserves in Zululand, South Africa. Growing up in the African bush, I have become accustomed to fires whether accidental or initiated by the Parks management. Either way, fires serve as an important ecological service in an ecosystem. It’s for this reason that I have chosen to do this month’s blog on the relevance of fires and burning in game reserves. 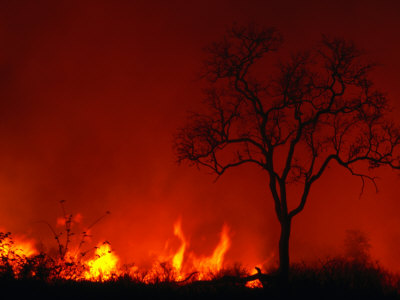 When previous conservation volunteers have come to visit Mkhuze Game Reserve, there has been a sense of urgency in their voices when they ask questions like “where is that fire?” or “should we report that fire”. These are both legitimate questions as fires do need to be reported and are potentially very dangerous. As a preventative, firebreaks are made around any infrastructure on the game reserve. This, in theory, means that a runaway fire should stop when it runs into the nearest firebreak. A controlled burn is of course more strategic. One takes into account the weather conditions and targeted areas of the reserve. Targeted areas usually consist of old plant matter that overtime, loses its nutrients and palatability. In fenced off areas/reserves such as Mkhuze, animals are not able to leave to seek greener pastures. It’s for this reason that humans have to light fires to remove organic materials that has accumulated. This also helps control the encroachment of undesirable plants.

The next concern highlighted is the danger that’s inflicted upon the animals. Fire is a natural element and therefore animals have instinctively learnt how to deal with the dangers of fires. Some animals run away while other animals take cover in thickets. Birds on the other hand use fires as an opportunity to ambush the many insects that flee away from the fire.

Thandazile and Water leading the pack through an area that had just been burned. This sometimes forces the prey to accumulate and the Wild Dogs can take advantage of this.

Fires usually occur just before Spring when the first rains begin. The saying “it’s darkest before dawn” applies here. Many animals have had to move off and the environment appears hot and bare after a fire. But after the first signs of rain, the lush grass starts shooting through bringing and attracting new life into the reserve. The new grass is green, full of minerals and nutrients and aids in the sufficient growth of animals and their newborns.

Fire is as natural as rain. Although it is not always nice to experience, it keeps the ecological cycle within the reserve turning. With palatable plant mass, the grazers are able to thrive and in doing so, the raptors and carnivores thrive to. Next time you see a fire in a game reserve, take care but also remember its ecological importance.

What is a Boma used for and how does it help conservation?
17 Oct 2016