Ever since I was a small child I dreamed of going to Africa. In July 2011, after 30+ years of dreaming, I finally got my chance to take a two-week safari vacation to Zambia. It was such an amazing and beautiful two weeks that I found myself not wanting to go home. From the moment I got back to the United States, I was planning my next trip, with the intention that I wanted to stay for a much longer period of time and obtain a sense of what it would be like to actually live in Africa and not just visit. I was given a contact with Wildlife ACT and from our first email; I knew my dream would soon become a reality.

It took about a year to plan my three-month trip and work out all the details, but luckily everything fell into place and I arrived in Richards Bay on July 2, 2012. When I arrived I was such a mix of emotions, excited to be in Africa again, expectant of what it would be like to volunteer with Wildlife ACT, and very homesick for my husband, family and friends. At first I felt a bit out of my element and nervous about communication issues. Luckily, Cathy Hue at Hluhluwe Research Camp was incredibly supportive and understanding and helped me work through my initial fears. After getting myself and my communications sorted during the first two weeks, I was able to relax and enjoy the volunteering experience and beauty of Africa once again.

A day in the life of a Wildlife ACT conservation volunteer – time out in the African bush.

I spent five weeks at Hluhluwe camp, one week at iMfolozi camp, two weeks at Tembe Elephant Park camp, two weeks at Mkuze Game Reserve camp and two weeks at Thanda camp. There were pros and cons at every camp, but overall I had a lovely time with each of the monitors and volunteer groups. It was really interesting meeting so many people from different parts of the world who all had a passion for conservation. Because I spent such a long time at Hluhluwe, I felt most at home there. However, I truly feel in-love with Tembe Elephant Park and the elephants that live there – some of the most amazing and beautiful animals I’ve ever seen. There was also some specific Wildlife ACT staff that made my time here special – Chris Kelly, Bronwen Kelly, Cathy Hue, Marumo Nene, Kevin Emslie and Michelle Swemmer. If anyone has a chance to meet them and spend time with them you will find they are some of the greatest souls you have the opportunity to know.

I also had some amazing interactions with the wildlife we were monitoring. A cheetah kill on iMfolozi, close-up with elephants on Tembe Elephant Park, black rhino on Mkuze Game Reserve, close-up with cheetah on Thanda Private Game Reserve and of course wild dogs on every reserve. Spending time with the Crossroads wild dog pack on Hluhluwe really got me hooked. Their social interactions and playfulness was wonderful to observe. Each pack at each park had their own individual personalities and it was so fun to learn the individuals and observe their social hierarchy, but I became very attached to the Thanda pack. The six adults and nine puppies that were there when I was at Thanda camp are amazingly beautiful animals. I found myself missing the dogs if we didn’t see them for a couple of days, hoping they weren’t getting into trouble with snares and relishing in joy when we were able to get a sighting of them. It was heartbreaking to find the alpha female of that pack, Stitch, had been snared, but then truly rewarding when I was able to be a part of the team that helped remove the snare and observe her healing process. And the puppies are just the cutest creatures you could ever lay eyes on!

So here it is, September 24th, the end of my adventure. As I sit waiting to catch my plane back home I think back on all the wonderful moments I had during my time with Wildlife ACT and I know that I’ll be back again. 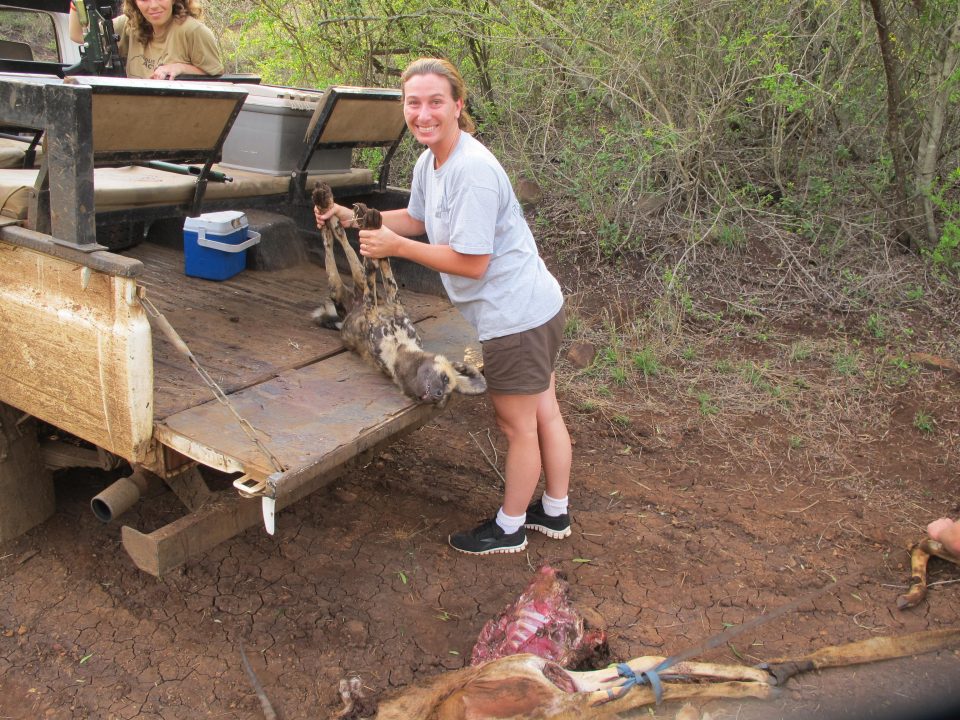 Stefanie assisting the capture team by loading a darted Wild Dog into the back of the truck. 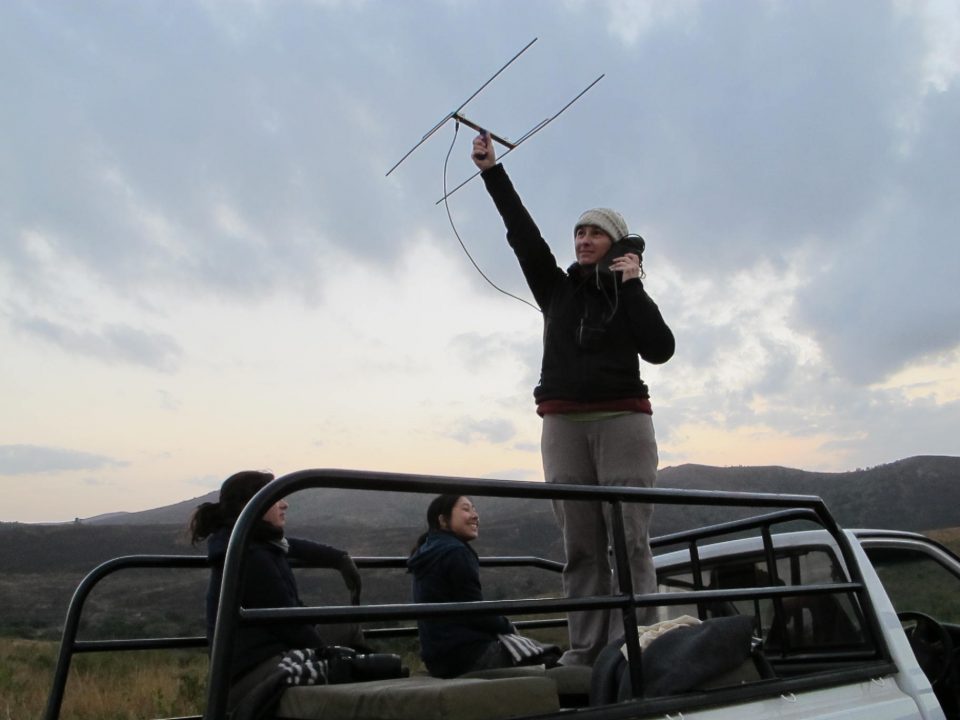