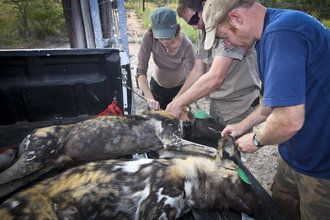 Two of Tembe National Elephant Park’s male painted dogs were relocated to Hluhluwe iMfolozi Park (HiP) last week. The males, nicknamed Bean and Bruce, were darted on Tembe on the 30th May after a few long days of trying to locate and then dart them. The team, including Wildlife ACT Fund’s Chris Kelly and veterinarian Mary-Anne Andersson, worked around the clock managing the Wild Dog relocation mission.

The dogs were successfully relocated into a secure holding enclosure (boma) on Hluhluwe-iMfolozi Park with the assistance of Endangered Wildlife Trust’s Brendan Whittington-jones and Ezemvelo KZN Wildlife staff. The dogs will remain in the boma for another month before being released into the reserve.

Male Wild Dogs tend to disperse from their pack at around two years of age. The males we were relocating are of that age and needed to be relocated to Hluhluwe-iMfolozi Park to bond with new females. The female wild dogs on Tembe are part of the male’s natal pack (so they’re all related and can’t mate). Two female painted dogs are in the boma next to them on Hluhluwe-iMfolozi Park.

African painted dogs are rated as a critically endangered species (the rating before extinction on the IUCN red data list) so we hope to get some wild dog pups soon!