It’s the early afternoon on a very hot day. Everyone is sleeping when the alarm sounds. “Everyone get ready as quickly as you can; we are off to dart a black rhino!” This is one of those things you read about in the Wildlife ACT literature but don’t really believe it happens to volunteers.

We have never moved so fast. Within minutes we were bouncing along the road to the meeting point. The helicopter was just a sound at first but got closer and louder as it located the black rhino. The vet successfully darted the rhino from the air and we waited on the ground for confirmation that he had stopped moving. While waiting, we are warned to stay away from the sharp end of the rhino (i.e. its head) in case he woke up!

The radio message came through that he was down then everything happened so quickly. We ran through the bush with backpacks of water (these were needed to keep the rhino cool while he was being treated). 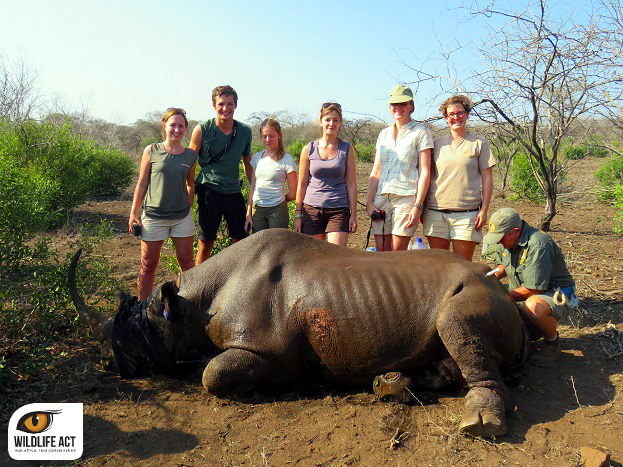 Next thing we are standing next to a black rhino who is badly injured. This is bush A&E (Accident & Emergency) and is incredible to witness! It’s hard to stand and watch a wounded animal being so cared-for and knowing that the most helpful thing you can do is take photos; but these photos are needed by management to keep records of his injuries. At the same time it is incredibly heart-warming to see so many people care so passionately about rhino and will go to any lengths to help one when it is hurt.

The rhino is cooled with water while the vet treats his wounds and administers antibiotics, as well as topical treatments to keep away infection and flies. There is a quick photo call before we need to be gone before the rhino wakes up. Black rhinos are grumpy on a good day, so you can imagine how much worse he might feel after all this man-handling! Once everyone is out of the way, the vet gives the rhino the reversal drug (wakey wakey) then races to the helicopter. It was time for us to celebrate a successful black rhino dart.

Just another day at the office!