Country music is littered with cheesy love songs. Songs of broken hearts and perseverance really do seem to be the backbone of most albums (I’ll also acknowledge other key themes such as bars and trucks). There are however some rather more raw alternatives to those clichés. Old Crow Medicine Road, a folk-bluegrass band out of Nashville, Tennessee, wrote about the “Sewanee Mountain Catfight” where the “girls gone wild on the Tennessee line….teeth go flyin’ in a roadside shack.” But that really does seem an approach to courtship more suited to Lions and Leopards.

Despite the potential for a wildly exaggerated account of events, it appears the occasion of a pair of Wild Dogs navigating the trials of courtship and taking up residence on Phinda Private Game Reserve may have come about through the more traditional, clichéd route which required persistence, most likely incurred disaster and probably required a hint of good fortune. And although this is to date only a brief liaison, it is cause for interest, excitement and a bit of old, country-like reflection. The excitement is largely because we actually had little to do with this inter-reserve match-making. The interest is because Phinda doesn’t have a resident pack of Wild Dogs and the pair comprises individuals from geographically separated reserves. 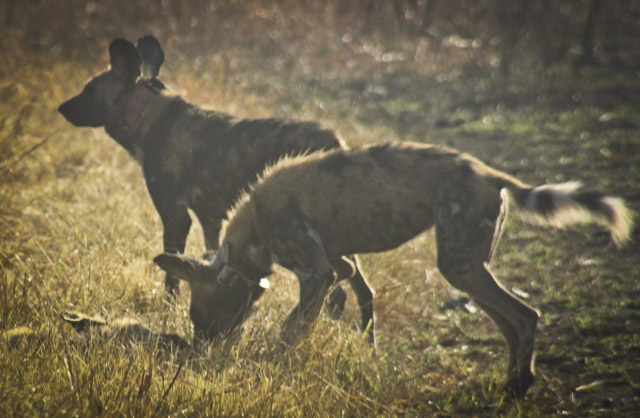 I previously mentioned this male in October 2012. He, along with his brother, originated from the Shiyane Pack in Hluhluwe-iMfolozi Park. The pair slipped out of the reserve and traversed the surrounds of the Hluhluwe area for several weeks before being reported in Phinda and then later in Mkhuze Game Reserve. Through the following weeks one of the males disappeared (although we’ll most likely never be able to confirm this, we presume he is dead since a dispersing pair would be unlikely to separate) and the remaining male was seen by Mkhuze’s Wildlife ACT monitors on several occasions; frequently near to the locations of Mkhuze’s resident “Mantenga” pack. The ninth wheel in an eight-pack persisted, rolling along at a distance. Shortly before Christmas, staff at Phinda began to report a pair of Wild Dogs which were being seen repeatedly. The Mantenga pack was missing a female. Photographs confirmed the match.

Whether they will be able to defy the historical odds and produce and raise a litter of pups as just a pair remains to be seen. Until such time though, it does still provide a little encouraging note that despite the incredibly heavy odds stacked against them, Wild Dogs are showing that they can traverse the many barriers and threats separating populations and packs, and DIY themselves into breeding opportunities.

If any readers observe Wild Dogs outside of protected areas, please note the location of the sighting, whether the animal is wearing a tracking collar and identify, or ideally, photograph any characteristic markings. Please notify Brendan Whittington-Jones on 072 992 9483 or brendanw@ewt.org.za