I have been working in the uMkhuze section of iSimangaliso Wetland Park (South Africa) for close to two years now, here I have spent every morning and afternoon tracking and monitoring the wild dog pack that I have come to love. As a monitor, it’s safest to treat the animals as objects in order to avoid becoming attached, but for me, that was never possible. Friends and family fall by the wayside when living in the bush and often the one consistent thing you have are the animals and one can’t deny that they effectively become your family. 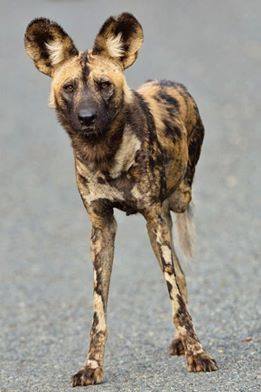 Thandifa, our beta female, was killed outside her den site in June. Four of the female yearlings were helping her to rear the puppies that had been born one month earlier. During the denning season, wild dogs are particularly at risk. The maternal instinct of a wild dog means she will risk her life to ensure the pups are protected. Outside the denning season, the wild dogs can flee when they are exposed to danger. Sadly she had her pups to protect and fought till the end with the objective of keeping the pack safe.

Thandifa was the first dog I came to know in uMkhuze. She was a three-legged dog and immediately stood out in the pack of 9. In my first week at uMkhuze, we found her with a snare around her neck. Her head had swollen up to the size of the soccer ball. She was not able to move much and was staying in the thicket, which made darting her near impossible. Pressure was mounting, as we could not get in to help her but we were staying with her to ensure that she was conscious.

The next day she eventually came out into the open and Wildlife ACT’s Chris Kelly together Dennis Kelly of Ezemvelo KZN Wildlife used the opportunity to dart her and remove the snare. That day I started idolising the Kelly brothers and still get goose bumps when I think about them arriving in the Ezemvelo KZN Wildlife Land Cruiser. Due to Thandifa’s extreme exhaustion she took a long time to wake up after being dated. Kevin (the relief monitor at the time) and I were given the task to sit with her and monitor her progress into the night. We sat with the wild dog pack and anxiously waited to see if she was going to survive the night.

Eventually at about 22:30 she started waking up. As she started getting up on her feet, the other wild dogs bowled her over with excitement. Much to everyone’s delight she became stronger and stronger. The pack’s persistent squealing allowed us to know that she was going to be alright and that they were going to stick with her through the night. We left them half an hour later with the intention of returning very early the next morning.

The following day we were getting strong signals for the wild dogs, several kilometres from where we had left them the night before. We were on edge waiting to see if Thadifa was with the pack when out of nowhere, she came flying out of the bush hot on the heels of an impala. She had not only fully recovered, but she had caught an impala and with the rest of the pack right behind her, they immediately brought it down and started feeding. She ate for three that morning.

Thandifa has won my respect over and over again since my first week at the reserve. She was previously alpha female but gave up this title when she lost her leg in a snaring incident. She dealt with anything that was thrown at her and it was evident that she was a special wild dog.

As beta female, she gave birth to seven pups in 2013. Despite her three legs, she, along with the rest of the pack, successfully reared all her pups to adulthood. One can only imagine that she must have posed as an awesome role model to the pups.

In May of this year, she gave birth to a second lot of pups. She chose a den site 15 kilometres away from the alpha female’s den site. More concern arose as all the remaining adults were assisting Thandazile, the alpha female, while only four of the female yearlings were aiding Thandifa at her den site. These yearlings had only just learnt how to hunt and when encountering other predators, it was the older male wild dogs in the pack that would stand up to the dangers of the bush. Despite this though, the yearlings would still leave to hunt and were successfully supporting Thandifa at her den site. Without much experience, these yearlings were doing a great job.

A month later though was when the incident happened and Thandifa was found dead. The pups were a month old and were in the transition of milk to meat and due to their young age, the likelihood of them surviving very long without Thandifa never seemed possible. Although I had faith in the four girls, everything pointed to the puppies dying and the yearlings abandoning the den site to go live with the remainder of the pack.

As it stands, we are not quite sure of the current situation. The females have left the previous den site but look to keep returning to a new spot not too far away. We see them regularly, when they leave the area to hunt and immediately return to the same place. Without sounding too hopeful, it seems like these yearlings are on a quest to rear these pups despite the odds being stacked against them. If Thandifa reared these yearlings right, and I know she did, then this scenario is possible.

Right now we are monitoring the yearlings every day, twice a day, and are doing everything we can to ensure that these females preserve the legacy that Thandifa left behind.