Everything you need to know

A unique project which combines our ongoing work conducting the largest camera-trap based leopard census in the world, along with surveying the northward migration of Humpback Whales off the coast of Southern Africa to investigate population growth. *Please note that we have concluded our Whale Survey project and hope to run it again soon! Dates TBA

Currently, there are no scientific census studies being done on the population size of Humpback Whales off the KZN coastline. Furthermore, it has now been 16 years since the last shore-based monitoring survey was completed, and with the current threats to these populations escalating (including shipping, oil and gas exploration, net fisheries, pollution and climate change), it is important that these populations be monitored consistently. This is so population trends can be tracked, and that threats and their impacts are researched for mitigation measures to be implemented if required.

The research component aims to contribute towards the knowledge regarding the Southern African east coast Humpback Whale populations, and investigate the population trends and the threats facing them. There is a need to re-survey the whale population in order to quantify the recovery of the population and trends in population growth.

A shore-based survey of northward migrating Humpback Whales was undertaken from Cape Vidal, northern KwaZulu-Natal, over the period 18 June to 13 August 2018. We are hoping to run the same project around the same time next year. This will ultimately contribute to a bigger census that will help us better understand the potential growth of the whale population, their distribution, behaviour patterns and habitat use. 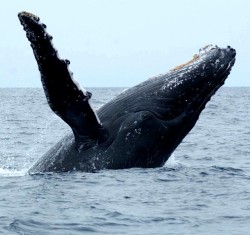 The Eastern Shores section of iSimangaliso Wetland Park. The Eastern Shores extend from St Lucia through to Misson Rocks, Lake Bhangazi and Cape Vidal and is part of the iSimangaliso Wetland Park World Heritage Site. It is also an occasional site where our Leopard Population Survey takes place. At the southern end is St Lucia – a beautiful seaside town where our volunteers are given an opportunity to visit and partake in the activities offered.

St. Lucia Lake is connected to the sea by a narrow channel that is rich in hippo, crocodile, Goliath heron and numerous fish-hunting birds. Four rivers feed the lake, maintaining the delicate balance against the inflow of sea water and evaporation. The Nile crocodile plays an important part in maintaining the ecological balance.

Cape Vidal and Mission Rocks are reef-sheltered beaches allowing relatively safe swimming, and excellent snorkeling. The coastline of the reserve is the natural habitat of turtles, two of which (Loggerhead and Leatherback) nest on the beaches. The Reserve is rich in bird life, and strolling through the dune forest is likely to bring you in sight of smaller mammals.

Daily observations will be carried out from two observation towers (termed North and South Towers) – approximately 1 km north of the Cape Vidal lighthouse. South Tower, a 60.5 m high vantage point, and North Tower, a 58 m vantage point (22m to the north of South Tower) will be manned between 07h00 to 17h00 each day (weather permitting). Both towers are visually and acoustically isolated by dune vegetation. This will be discontinued during periods of rain, when visibility directly east (offshore) of the observation platforms drops less than five kilometers, or when wind speeds are greater than 25 knots.

Observers will include dedicated volunteers from Wildlife ACT. Two rotating teams of volunteers provided by Wildlife ACT (of two observers each) will undertake observations on each platform. Both observers in each team will search the entire area of view as was carried out in the 1988 to 1991 and the 2002 series of surveys. In in the 2002 survey, as a result of higher densities of whales and the tendency of observers to search to the south (where they knew the whales were coming from), it became necessary to limit observation efforts to the mid-line of the survey area. In this case, a “survey box” will be demarcated by two marker poles directly ahead of the towers, and observers can concentrate their efforts within this box. All observation efforts will be recorded, as well as weather and other environmental conditions at hourly intervals, starting a half hour after the observation commences.

Once sighted, whale groups will be tracked using a standard survey theodolite (to be orientated daily on a standard reference object on the shoreline) to establish their speeds of movement and distance offshore. These parameters are required for computer determination of the groups sighted by both platforms for use in the capture- recapture model, and to determine the time of the groups crossing the mid-line of the observation area. Positions of the whales will be immediately plotted on a chart by observers to both assist tracking and provide an estimate of where the group will next expect to surface. This type of tracking allows for real-time crosscheck of tracking errors.

There will be 6 volunteers, split into groups of 2 rotating throughout the two week cycle between whale monitoring, and camera checks. Volunteers would need to do five hours of observations each day – weather dependent since rain, winds of over 20 knots or fog preclude sightings, and no observations are done under these conditions.

The schedule would be:

The North Tower observations are used in verification studies of groups missed by observers on South Tower using a sighting mark recapture methodology.

The team on Eastern Shores will be rotating between the Whale Monitoring Observation sessions, and the work involved on the Leopard Population Survey, which is being conducted at the same time. There will be 6 volunteers, split into groups of 2 rotating throughout the day between whale monitoring, and camera checks.

With the use of Camera-Trap Surveys we are able to estimate the density and gauge population trends over time. At specifically chosen reserves, the project sets up a minimum of 30 camera-trap stations, each of which has two camera-traps (to capture the left and right hand side of the animal). The stations are set-up along roads, animal paths and other areas (such as river beds or drainage lines) which Leopards may frequent. The surveys are spread across an area that covers 100 – 120 km2 and runs for 50 days before moving to a different reserve.

Estimates of Leopard population size in any given area are determined using capture-recapture models, which is why this survey will run within KwaZulu-Natal for up to 5 years.

As a volunteer, you will be involved in helping the Wildlife ACT monitors with a variety of tasks – depending on what stage of the survey you arrive. You could possibly help with the setting up or taking down of the motion sensor cameras to move the project to a different Reserve/location. Predominantly though, you will be aiding with the downloading of images from the cameras, recording the captured data, managing the camera-trap sites as well as helping with identikits for each animal if necessary.

While the team are on their way to perform the routine checks to the camera sites, they will enjoy the excitement of any of the local wildlife that they may encounter en-route. Remember also that our monitoring vehicles have access to all roads on the reserves (including the management roads that are closed to tourist vehicles). Once the selected camera-sites have been downloaded for the day, and the photographs have been correctly cataloged, participants will have some free time.

Our Wildlife ACT Leopard Census team (4 volunteers and 2 wildlife monitors) will be housed in a communal, “open plan” house, with a fully equipped kitchen, indoor bathroom, and a lovely barbecue area. The accommodation includes ‘loft-style’ open bedrooms (with no doors) that overlook the downstairs lounge area.

Each sleeping room (consisting of two single beds) will be assigned to participants of the same gender, but none of the sleeping rooms have doors. The bathroom (with bath, shower and toilet) does of course have a door! View the gallery.