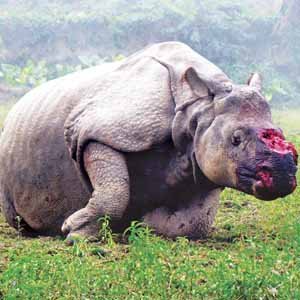 Wednesday 22 September has been declared “Rhino Day” by the WWF and heralds the start of Rhino Month in which awareness is being raised for the dramatic increase in the poaching of these animals since 2008.

According to Environmental Minister Buyelwa Sonjica “139 rhino – five black and 134 white rhino – had been poached on private land, provincial reserves and in the Kruger National Park between January 1 and July 16 this year”.

“The rate at which rhino are being poached in South Africa is heading for a point where the number killed will exceed the number born. More rhino have been killed in the first seven months of this year than were poached in the entire period from 2000 to 2007″, says Joseph Okori, the World Wide Fund for Nature’s (WWF) African rhino programme manager.

Various media reports have indicated that rhino poaching is now a well organised, syndicated and extremely well equipped criminal activity, being undertaken by professionals in many instances. According to Okori, “They have helicopters and assault rifles, and are able to procure narcotics (to dart the rhinos). They must have very good connections within institutions that possess these drugs to be able to do so.” The environmental minister acknowledges that “current measures are not sufficient to curb poaching”, and says that her department is setting up an interim national wildlife crime reaction unit.

The time has come to act together and let our leaders know we are serious and passionate about saving these animals from merciless slaughter.

Wildlife ACT and Rhino Africa are together organising an anti-rhino-poaching protest outside the Parliamentary Buildings in Cape Town, South Africa at 12:00 noon on 22 September. PLEASE JOIN US TO SHOW YOUR SUPPORT! We will be congregating at the Louis Botha statue with posters, placards and vuvuzelas, so join us to blow your horn and make some noise to show support for our rhinos. Please try to wear red if you can. We hope to see you there!