Wildlife ACT’s wildlife volunteers in Hluhluwe-iMfolozi Park (South Africa) came across a Wildebeest carcass – thought to have been killed by lions the night before. Within minutes two spotted hyenas arrived on the scene and tried to chase the White-backed vultures that were already scavenging on the carcass. Eventually all settled down and everyone got a few scraps for breakfast!

The spotted hyena is a highly successful animal – being the most common large carnivore in Africa. Its success is due in part to its adaptability and opportunism. It is primarily a hunter but may also scavenge, with the capacity to eat and digest skin, bone and other animal waste. In functional terms the spotted hyena makes the most efficient use of animal matter of all African carnivores.

Like other vultures, the White-backed vulture is a scavenger – feeding mostly from carcasses of animals which it finds by soaring over savannah. 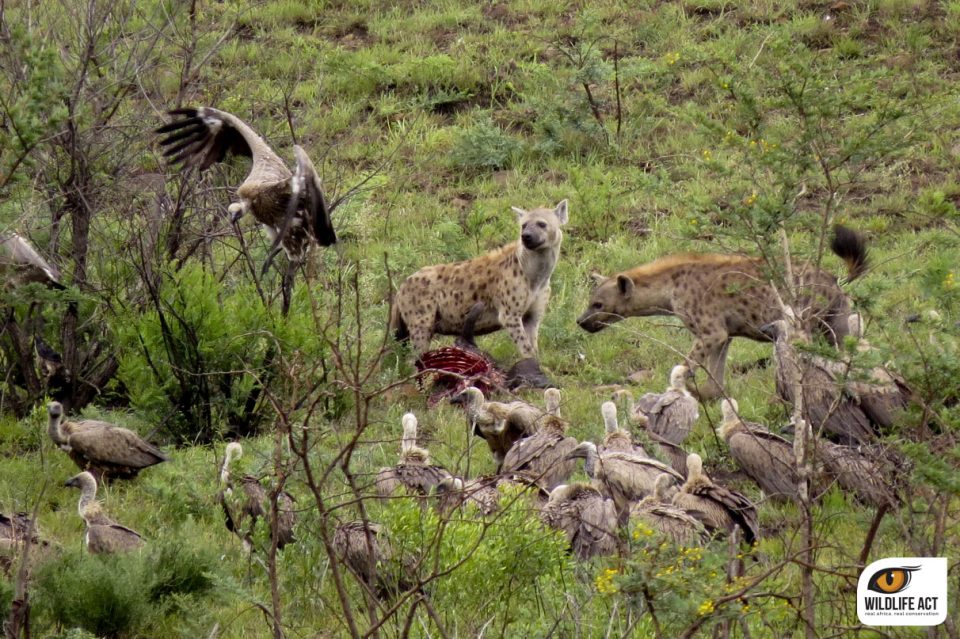 The most recently published data on the population of White-backed Vultures suggests that the species has declined extremely rapidly – with a median estimate of 90% (range: 75-95%) over three generations (55 years) (Ogada et al. 2015). Vultures throughout southern Africa are specifically targeted for medicinal purposes in the muthi trade as well as for meat. Poachers catch scavenging vultures by poisoning animal carcasses, which can wipe out huge numbers at once. Almost 70% of breeding pairs having vanished since 2001 as a result. Find out more about the status of the three tree-nesting vultures we work with and what you can do to help >> Work with Endangered Vultures