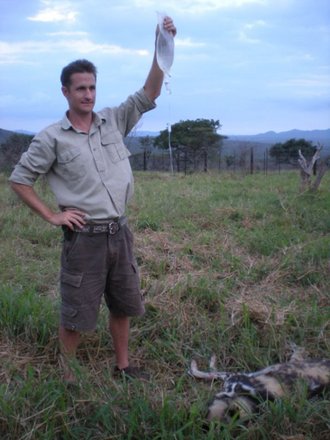 Friday 16 April was an exciting day for Wildlife ACT as we joined Ezemvelo KZN Wildlife Staff and members of the Endangered Wildlife Trust at the airstrip in Mkuze town, to witness the arrival of a group of wild dogs from Venetia Game Reserve. The dogs were flown in successfully by the Bateleurs (thanks guys!) with no problems.

The dogs were then transported to the holding bomas in Zululand Rhino Reserve. The pack is going to spend some time there and be continually monitored before we take them to be released on Mkhuze Game Reserve. This will only happen once the first group who are currently occupying the Mkhuze boma are successfully released.

The 6 male wild dogs currently in the Mkhuze boma (who were the dispersal pack from Hluhluwe-iMfolozi Park) should soon be joined by three captive-bred females from De Wildt. This should take place within two weeks if all goes according to plan! They will be bonded with the males, and during this time volunteers from both Mkhuze and Thanda Reserves will be making daily observations on the process, recording data etc. Once the dogs are successfully bonded, the pack can be released from the boma into the Reserve, hopefully by early June.

This will mean there are going to be two packs of wild dog on Mkhuze in the future – exciting stuff!