Zama is the head rhino monitor on Somkhanda Game Reserve in South Africa – he’s one of four black rhino monitors who usually share one vehicle for all monitoring and tracking duties. This makes it difficult to split up or respond as quickly as possible to emergency situations. Zama also works in the surrounding communities, educating local schools and community leaders on the value of conservation. (For more information on our Community Conservation Project, click here.) 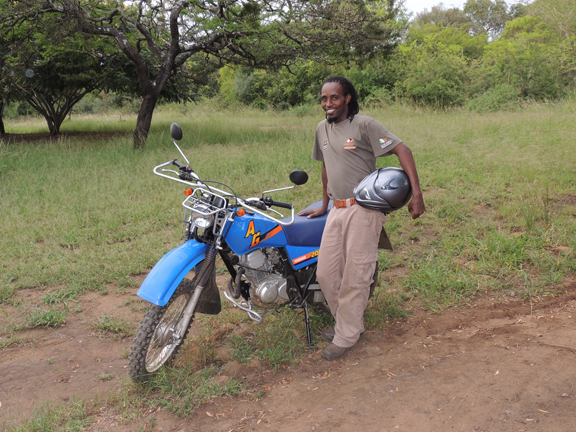 Zama Ncube with the motorbike sponsored by Race4Rhino

2013’s Race 4 Rhino team, lead by Scott Irving, managed to raise R167 925.00, of which R 40 000.00 was spent on the new Yamaha AG200 to aid Zama’s monitoring duties. This will help the black rhino monitors of Somkhanda to be more efficient in their fight for rhino conservation. The rest of the funding is being used to run the operation; covering fuel, much needed vehicle repairs, uniforms and equipment.

Thank you to Race 4 Rhino and everybody who contributed towards this fantastic donation.