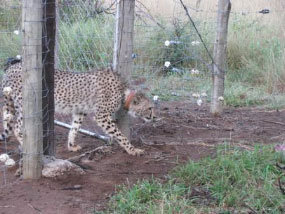 Will it work and will they start to mate?

Three of our wildlife volunteers, Nick and John Osmun and Pat Callaghan from Canada assisted our team with the transfer. They helped initially to attach the VHF collars on the 12th Jan. This involved darting the two cheetah in the boma.

Early next morning on the 13th of January the first cheetah was released. The gate opened and she was lured out with piece of meat. It went well, and the cheetah moved off.

5am on the 14th of January we found her and she had moved south about 3 km.

Once we determined the location of our first cheetah we released the second female. She went North from the boma.

Cheetah will be monitored intensively during their first few weeks after their release, to ensure they do not break out of the reserve and see how they integrate with the resident population. Hoping they will mate soon with the resident males. Watch this space for the next update! 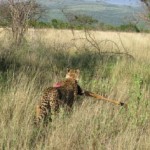 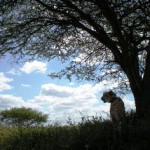