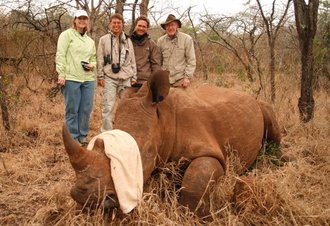 Volunteers on Thanda Reserve recently assisted with the relocation of a White Rhino cow. Once the rhino was located, the monitor and volunteers stayed with the animal for 3 hours while waiting for the Game Capture team to arrive and dart the rhino from the helicopter. The rhino was then captured and transported to her new home. Volunteers were able to participate and gain both knowledge and understanding regarding how the whole capture operation works, and the reasons behind the methods used.

Notching of White Rhino also took place on Thanda Game Reserve in September. Notching is an important process whereby identification marks are made in the rhino’s ears to allow each individual to be uniquely recognised for the accurate monitoring of these animals. Volunteers assisted the wildlife monitor in searching great distances by vehicle to locate the rhinos, and observed as the vet notched the rhinos’ ears, and put microchips into their horns which allow the horn to be identified. One of the braver volunteers was then given the task of collecting dung from the rhino and smearing it onto the rhino’s nostrils to mask the scent of humans and make the animal feel more relaxed upon waking.

Once rhino notching was over, volunteers were also fortunate enough to observe the veterinarian tranquilise one of the collared male cheetahs on the reserve, so that the collar could be removed and placed onto a female. Once the collar was removed the volunteers got to move the tranquilised cheetah into a shaded area, and then watch and wait for the immobilising drugs to wear off slowly.

On a very positive note, the 15 wild dog pups on Thanda are all still healthy and all accounted for! This is an unprecedented success in this area, given that wild dog puppy mortalities are one of the major factors affecting the population growth of this endangered species, with an average of only 60 % surviving their first year. The puppies are now 5 months old and have started to participate in the hunts – the most recent example was witnessed by our volunteers last week when the adult dogs caught a Red Duiker and then left it up to the pups to kill it. This was an excellent learning opportunity for the pups, who will soon have to earn their keep in the pack by assisting fully in the hunts.