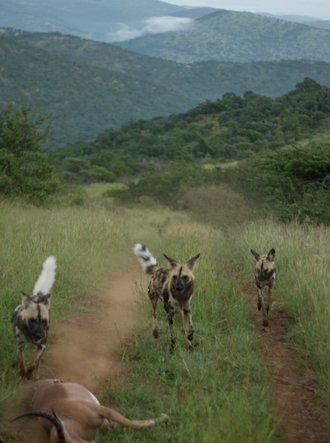 In August 2010 I wrote an article on the similarities between Marmite and African Wild Dogs. While I still am prepared to accept that the sludge-like, savoury concoction has little physical similarity to our country’s most endangered carnivore, I still believe the advertising slant once taken for Marmite of “you either love it or you don’t”, may unfortunately still hold true for some areas of South Africa and their attitudes towards Wild Dogs.

Given this thought, perhaps you’d understand my fascination with the recent news headline that New Zealanders are in panic over an impending “Marmageddon” as it is being dubbed in the media. The island nation has almost run out of Marmite and even their Prime Minister has been feeling the impact enough to make comment on the potential national crisis of a Marmite-depleted future.

Now wouldn’t it be great if we had a government and public that was equally “worried” by the precarious state our national Wild Dog population finds itself in, with less than 450 of these animals in the South African veld. Given the past week’s encounters with members of the general public and through receiving reports of “Wild Dog” sightings it is clear we still have a long way to go in just getting across the message that an African Wild Dog is a different animal to a jackal, hyaena or domestic dog.

Work is still ongoing to develop a national, collaborative conservation plan for Wild Dogs but fortunately at local levels there are also private landowners working with NGO’s and local conservation authorities to do their bit for Wild Dog conservation, and to generate tourism exposure for this captivating, and often misunderstood species. On this note I mentioned last month how many of the resident populations of Wild Dogs in KwaZulu-Natal have a history linked to another nearby reserve, and the population in Thanda Private Game Reserve is no different.

Thanda was the first private game reserve in KZN to take on the responsibilities of a resident Wild Dog pack, originally as a result of single-sex dispersal event from Hluhluwe-iMfolozi Park in 2004. To establish a relatively stable pack this was followed by supplementary introductions of two males and females from Hluhluwe-iMfolozi and De Beers Venetia-Limpopo Game Reserve respectively in 2006. The reserve has also on several occasions played temporary host to additional dispersing animals from both Hluhluwe-iMfolozi and Mkhuze Game Reserves. In turn dispersers from the Thanda pack have been recorded in both Zululand Rhino Reserve and Mkhuze, further highlighting the potential dispersal routes we are working on establishing to link resident Wild Dog populations within the Zululand area.

Successful breeding, dispersal events and sporadic depredation by lions have all contributed to a naturally fluctuating Wild Dog population on the reserve, a flow which has shown both the vulnerability of a single pack to natural threats but also the resilience and reproductive potential of the species. It is anticipated that the reserves’ current range expansion initiatives will further contribute to the KZN Wild Dog Advisory Group’s intended goal of a establishing and maintaining a healthy, breeding, socially and genetically viable subpopulation of Wild Dogs in the greater Zululand/Maputaland area.