There are approximately 5,500 free-ranging Wild Dogs left in Africa. They have disappeared from at least 25 countries during the past 50 years. With fewer than 450 free ranging Wild Dogs left in South Africa it is the country’s rarest carnivore and it was in this context that the removal of the pack of Wild Dogs from Thanda Private Game Reserve (Thanda) was an emotive issue.

As a result of management complexities resulting partly from a high density of spatially dominant Lions, and the prey population concerns attributed to the suite of large carnivores (which included Lions, Spotted Hyaenas, Wild Dogs, Cheetahs and Leopards) the decision was taken to remove the pack of Wild Dogs which had unfortunately made a habitat of spending the majority of their time on neighbouring properties.

The result of the decision was that Thanda stepped away from the managed metapopulation initiative for Wild Dogs in South Africa. This is a project coordinated by the Endangered Wildlife Trust, through the national and KwaZulu-Natal Wild Dog Advisory Groups, which facilitates management cooperation between a series of geographically isolated private and state reserves that are capable of sustaining Wild Dogs, but which need continual, intensive, collaborative efforts to manage these subpopulations as one, collective metapopulation. Although the loss of the 140 km² Thanda from the initiative after seven years of participation was disappointing, the decision by the 1000 km² Tswalu Kalahari Reserve (Tswalu) to return to the fray was particularly encouraging. In this case Tswalu, a Kalahari reserve close to Hotazel in the Northern Cape, agreed to once again reintroduce Wild Dogs approximately two years after the last remnants of their former resident pack disappeared through a combination of disease, Lion competition and neighbours hostile to predators which leave protected areas.

Collaboration between the Endangered Wildlife Trust, Thanda, Tswalu, Wildlife ACT* and The Bateleurs meant that such a move was made possible and on the 29th of June the King Air Charters, King Air 200, landed at the Mkhuze Airfield. A combination of early morning fog which delayed the arrival of the flight, and the speed at which the 12 Wild Dogs were darted in the Thanda boma (a mere two hours) meant that within 30 minutes of the aircraft’s arrival, the loading of the pungent cargo had begun. With the aircraft cabin lined with plastic and blankets to absorb any Wild Dog “leakage”, and the veterinarian Mike Toft ready with “top-ups” of immobilizing drugs to keep the Wild Dogs drugged for the journey, the pilot Arthur Karatzas guided the aircraft with 3% of South Africa’s free ranging Wild Dog population onboard, westwards out of Zululand. 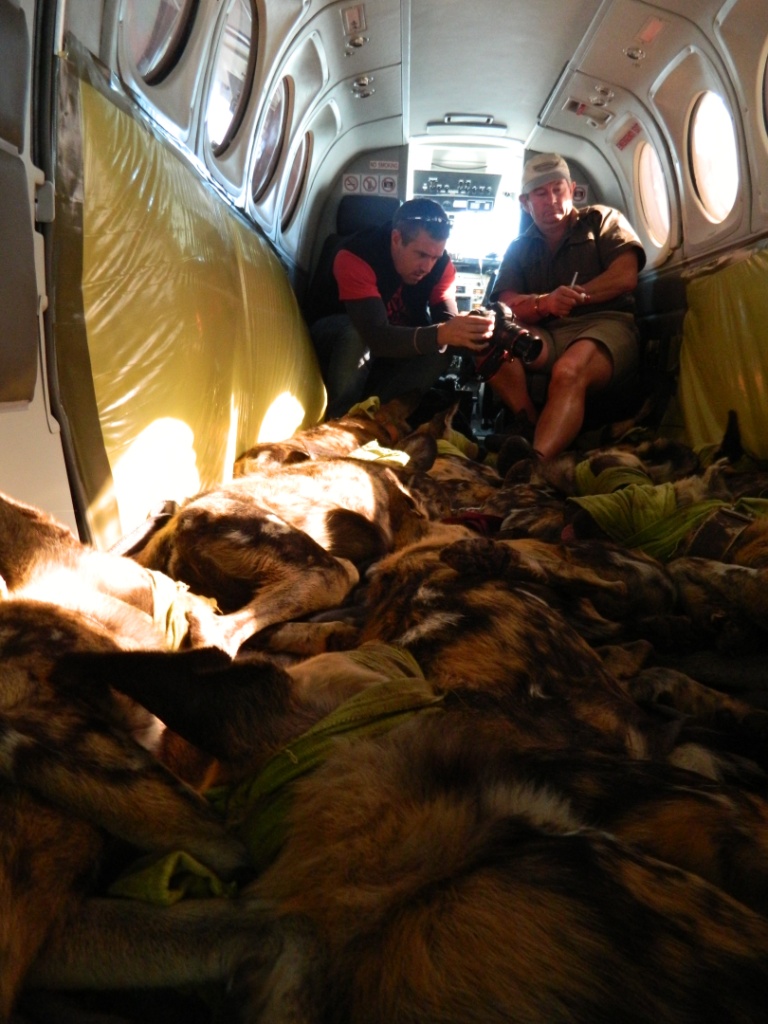 Fortunately the flight was smooth, largely uneventful, and the Wild Dogs, with the exception of some head bobbing and a few sporadic attempts by individuals at waking up, slept throughout the approximately three hour journey. After touch-down at Tswalu the delighted management and ranger contingent of the reserve briskly loaded their newest acquisitions onto bakkies and headed off to unpack the Wild Dogs into their secure, electric-wire protected, holding boma. With the final checks carried out by the veterinarian, the blindfolds were removed and the Wild Dogs lay disorientated and drugged on the rusty Kalahari soil, in the shade of Camel Thorn Acacias. It was remarkable how the blotchy patterns of the Wild Dog coats blended in with mottled colours from the trees, soil, shadows and desiccated fallen branches.

By mid-afternoon several of the pack had begun a lethargic, hung-over feed on the Gemsbok carcass left in the boma. As the evening wore on, the resident Lion pride arrived at the boma, and patrolled the perimeter repeatedly, leaving a highway of pug marks in the sand. The Wild Dogs had by this stage worn off most of the effects of the drugs and spent their time between chittering at the Lions, feeding and discovering their new plot of land. By the early morning the Gemsbok carcass had been largely cleaned up by the pack and all twelve watchful Wild Dogs made certain to avoid any intentional proximity to humans; whether the humans were on foot or in a vehicle. In time though it is anticipated that the lion-savvy, tourist-habituated pack will settle well and Tswalu will be ready for the release. Until then the pack will adjust to the sandier soils, the new smells, the crisper air and the taste of Kalahari game. We look forward to their release and hopefully, eventual breeding in South Africa’s latest, and eighth, Wild Dog metapopulation reserve.

* A special mention of thanks needs to be made to Michelle Swemmer (Wildlife ACT) who had monitored this particular pack, with all its natural quirks and internal politics, intensively for the past five years 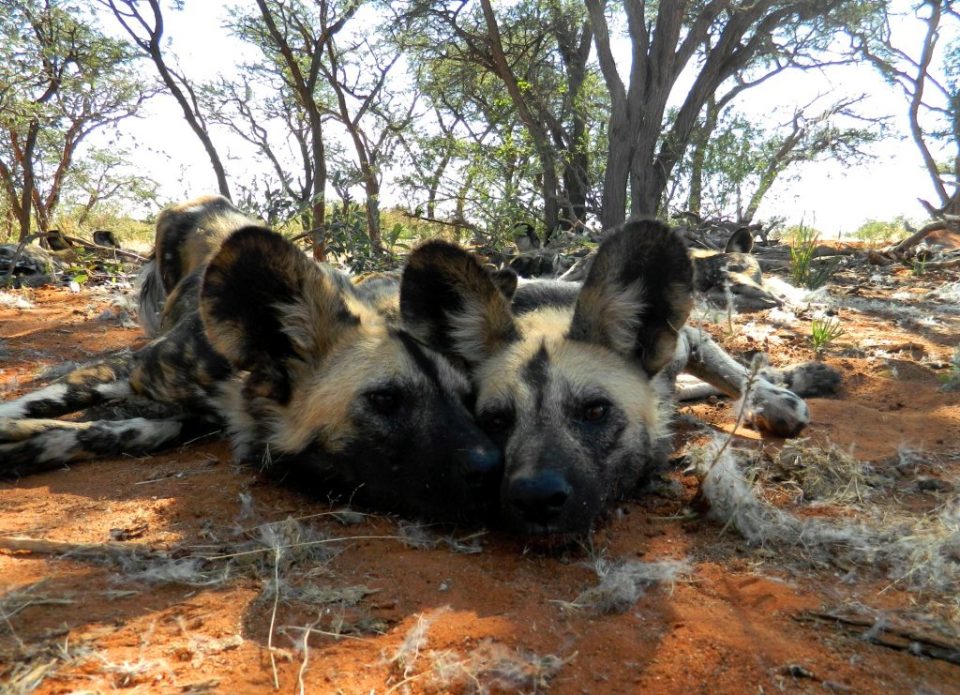 Wake up time in Tswalu Kalahari 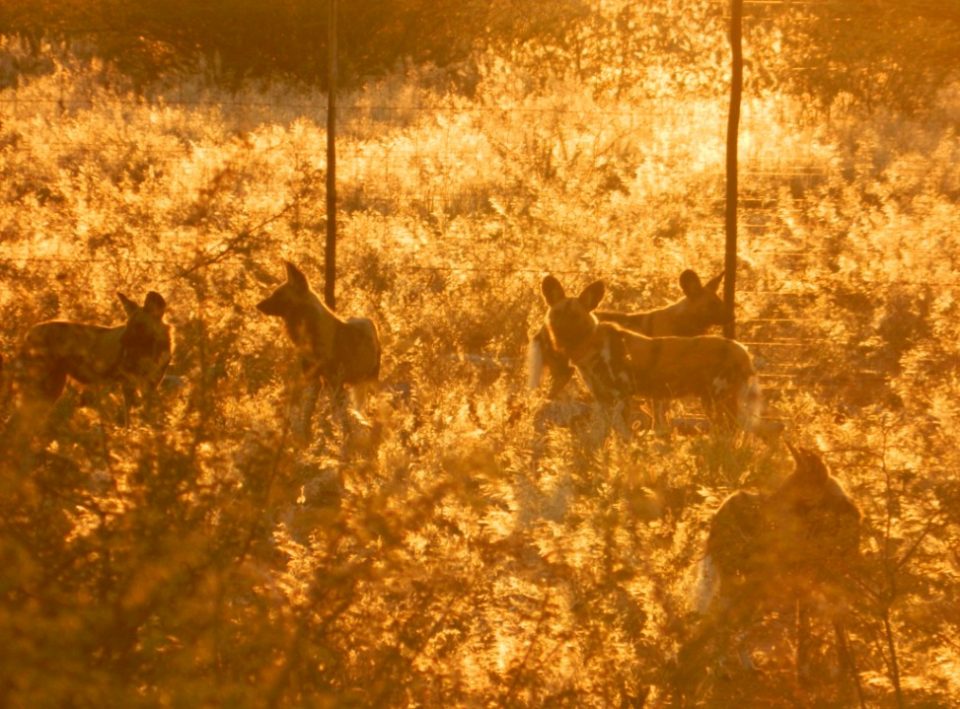