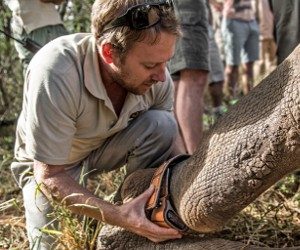 I grew up and completed my schooling on the outskirts of Pietermaritzburg in KwaZulu-Natal. While growing up, I was fortunate enough to visit numerous game reserves in South Africa and grew especially fond of the wildlife and reserves in Zululand.

After my schooling I completed my diploma in Nature Conservation at Saasveld College in the Western Cape. Whilst completing my practical training along Zululand’s coastline monitoring turtles and crocodiles within the Greater St. Lucia Wetland Park Heritage Site, I developed a keen interest in game capture and soon thereafter found myself managing and running a chemical and passive game capture for a private company.

During this time I noted the need and the importance of post-release monitoring efforts of the priority species we moved onto reserves. This led me onto my next experience: working as a researcher and post-release monitor of Black Rhino in conjunction with the WWF-Black Rhino Range Expansion Project in Zululand. Enjoying the monitoring operations of my work I decided to move into a permanent post at uMkhuze Game Reserve where I oversee all monitoring operations.

I had noted, after working on a fair number of reserves across South Africa, the need for properly managed and funded monitoring programs on reserves which had priority species. Following this the three of us got together and established Wildlife ACT in Zululand.

In 2017, Chris Kelly was recognised for a Special Award for Endangered Species Conservation at the the Rhino Conservation Awards. A real honour!