Being Summertime our days usually start early around 3.30am and end rather late in the evenings allowing us to get all nocturnal, crepuscular and diurnal priority animals monitored. This morning (within 25 minutes of being on the road) we were treated to yet another fantastic sunrise in the bush. There is something about the sunrise here that is more special than anywhere in the world. Maybe it’s the promise of a brand new day looking after these animals to keep them safe and alive for our children and grandchildren to see… 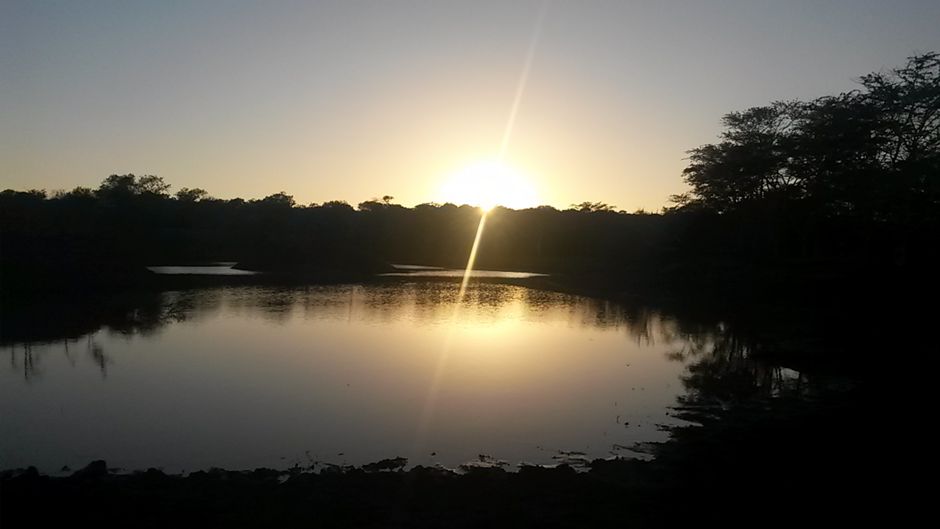 Sunset on the Zululand Rhino Reserve.

Another 5 minutes in the field we bypassed one of the rhino monitors who reported 5 cheetah just down the road. Perfect! Our priorities over the last few days had been to locate a few specific Zululand Rhino Reserve cheetah that hadn’t been seen in a while. Our wildlife monitor, Megan, was explaining to us the different family groups and cheetah coalitions around this area. We hoped to see a mum and her new litter of cubs! Little did we know that we were in the front seats for a once in a lifetime experience…

Slow approach to the trespassers in their territory…

Less than 3 minutes later we located 3 cheetah, which we quickly identified as the reserve’s coalition of 3 brothers. But we were told 5 cheetah? At first we thought they might be stalking some prey, but as we scanned the area we soon spotted another 2 cheetah… 2 more males? Once again, using the identity kits that volunteers help put together by capturing photos of all the individuals, we identified these 2 to be the newly released coalition on the reserve (recently released to strengthen the gene pool), the first reported sighting!

The 3 brothers slowly approached the other 2 with an initial soft greeting – yet this didn’t last too long. Soon sounds of interaction erupted. Squeaks and squeals and what almost sounded like bird chirruping were coming from all directions as the 3 brothers appeared to circle the other 2. This testing of the smaller coalition went on, back and forth for a couple minutes, then a rest period, then an individual would initiate again and the process would start all over.

We weren’t sure how this would play out. Would the larger coalition force the smaller coalition out of their territory? Or would the two cheetah coalitions join forces to become one large coalition? So many possible outcomes… yet the 3 brothers eventually stood up, and with a quick glance back at the 2, left the area together. Both coalitions intact! We all looked at our watches and couldn’t believe it – we had been watching this epic testing of wills for over 150 minutes – every second memorized!

Fight between 2 Cheetah Coalitions on ZRR

Without the volunteers to scan, help record behaviour, get GPS coordinates and take ID photos of the entire exchange, research of these events would be rather difficult. Wildlife ACT rely heavily on a constant stream of volunteers to help the monitors document experiences such as this. We can’t wait to see what the next session will bring!

It’s more than just the animals; it’s the experience – knowing that you are making a difference. It’s the African people and their culture and it’s the fellow volunteers and the bonds you form. TIZU (This Is Zululand) after all.