In fact they’ve been involved – directly and indirectly – with the airlifting of white rhinos, the calling-up of lions, searching for a female African Wild Dog (also known as a painted dog) nicknamed Mango as well as a female cheetah for fitting new tracking collars on them.

All of these while still doing their intensive monitoring work of African Wild Dogs and checking up the camera traps for both leopard and cheetah surveys… and while moving out of our previous camp!

Under the bright, harsh sun of Zululand, the Ezemvelo KZN Wildlife Game Capture Unit has been relocating white rhinoceroses. The only way to move these pachyderms out of remote areas is to airlift them by means of a helicopter veteran of the Vietnam War. No further information about the relocation will be mentioned here due to the tragic importance of rhino poaching that is currently hitting South Africa. 668 rhinos were savagely poached in 2012 and already more than 367 for this year! 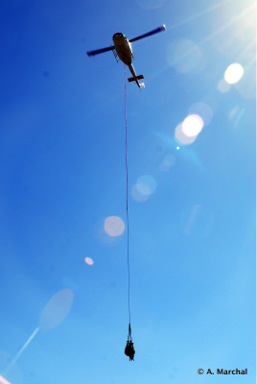 Lion call-up attract lions using a bait chained to a tree and by using speakers broadcasting a distressed buffalo calf or a pig. The call-ups were conducted in Hluhluwe’s Nqumeni Section over two nights from two different sites. The first night, one of the sites was successful and three sub-adult males and one adult female were darted, branded and blood sampled. The female was fitted with a GPS collar and two individuals had their paws 3D-sampled. 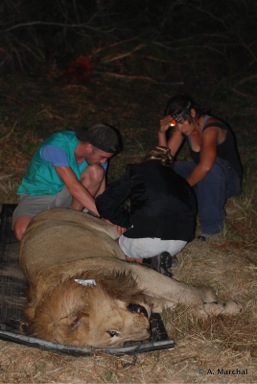 Darted lion during a call-up in iMfolozi

No lions came to visit the sites on the second night. The team was fortunate enough to have two African Wild Dogs nicknamed Sandy and Reef visit from the cryptic un-collared Masinda Pack. The two Wild Dogs and a spotted hyena made a feast out of our bait, a very unusual close-proximity. 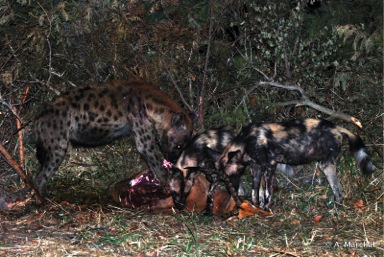 Wild dogs and hyena having a feast in close proximity

The search for Mango and a female cheetah for collaring

Mango is a beautiful female African Wild Dog from Shiyane Pack. She has a GSM collar that enables Wildlife ACT to monitor the pack and its 18 members – including seven puppies. Unfortunately, the collar has been faulty over the last few weeks and it was therefore primordial to change it as quickly as possible. But… Wild Dogs are clever and whenever the vets are around, they decide to disappear into the Wilderness – where there are no roads! 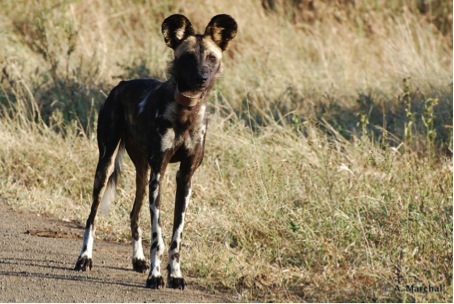 At present, Hluhluwe-iMfolozi Park doesn’t have any collared Cheetahs. This is why Wildlife ACT is planning to collar a few individuals for monitoring purposes. Collaring Cheetah is a tricky mission, as the species doesn’t respond to call-ups. Sitting for an hour with a female Cheetah and her three cubs was the perfect opportunity to collar the female, but they all disappeared when the vet was on her way us. It was then impossible to find them again during the following days.

A female cheetah and her three cubs

After 10 months in a camp situated in the middle of an open patch where lions, elephants and African Wild Dogs were often seen from the patio, it was time for us to move out and start building up our new camp! The new camp is an hour further into the park and is situated on Mbuzane Hill with an amazing view over the Black iMfolozi River. 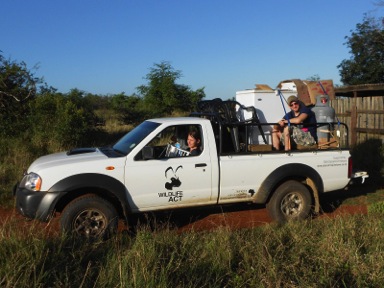 Moving out of our previous camp in iMfolozi 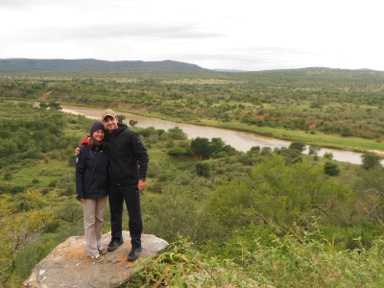 Szandra, Greg and the view from the new camp – thanks guys for your very valuable help over the two last weeks