It was another beautiful day in Zululand, South Africa, but today was going to be different because the conservation volunteers were going to be part of a lion contraception, a rather unusual procedure, which was led by the local wildlife vet Dr. Mike Toft. We heard that Thanda’s ‘south pride’ lions had been spotted along the Mduna river, so the “call up’s” would start around 17h00.

You could feel the anticipation in the air with the sound of a warthog and baby buffalo permeating the surrounding. As dusk settled in and our eyes strained to maintain some sort of clarity somebody in the back saw a movement in the low light. I switched on my torch…hyena, the ultimate opportunist and for the next half hour we were entertained by the sounds and antics of +/- six hyenas.

All of a sudden a group of hyena went storming off into the bush with their tails between their legs … the king of the beasts had arrived, a rather young lion of two years and his brother and sister where there for back up. The giant carnivores homed in on the distress calls and all we were waiting for was the sound of Mike’s dart gun.

It was 18h30 as the first dart hit its target, then a second and a third…the lions where in lala land. The conservation volunteers were instructed to approach the scene and assisted where we could. Mike told me that the 12 year old mother lion never took the bait and that I should keep an eye out for her, while the rest of the conservation volunteers helped Mike with contracepting the female lion and taking blood samples from the males.

Many pictures were taken and the smell and touch of an African lion will be in the hearts of our German conservation volunteers for a long time. It was almost 19h30 when Mike gave the lions the counteracting drug to wake up the sleepy bunch. We watched as each lion raised their heads in confusion and slowly but very surely made their way back to the impala bait for a well deserved snack after undergoing such an ordeal. 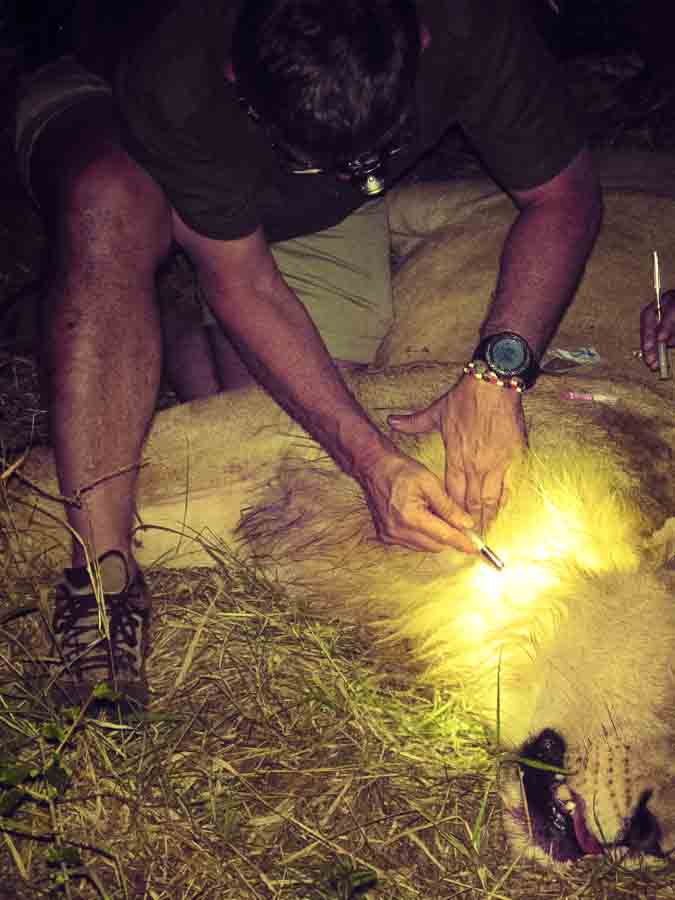 *Note: Small populations on small reserves still need to be managed as animals can’t immigrate out of the reserve.