There really wasn’t much left of the tracking collar. It was still giving out a reasonably strong signal, but there wasn’t much more than a scuffed brown battery/transmitter block attached to a piece of antenna. The rest of the collar was most likely making up the contents of some Spotted Hyaena’s latrine offerings. We found the collar remains at a hyaena den in a thicket about half a kilometre from the Hluhluwe River. It’s not the first time that hyaenas have picked up collars, chewed them up and wandered off with them; whether hyaenas were responsible for killing the Wild Dog wearing the collar is a mystery open for debate. 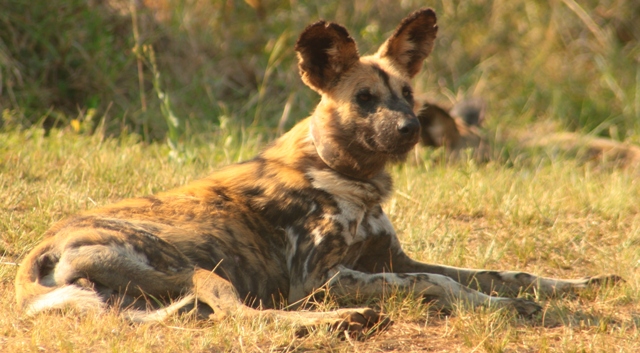 The fact that the collar signal had last been picked up by Cathy Hue, the Wildlife ACT monitor in November 2012 and was only next heard in March 2013, suggested it was most likely moved at some point to where the permanently transmitting signal could be received. Perhaps it had been moved from inside a den to outside. We shall never know. I am sure though that it will not be the last time a collar from a Wild Dog will be found masticated and shredded like the remnants of one of my shoes a hyaena recently walked off with.

In this case the collar belonged to Norma, a female Wild Dog born into the Nombali pack in 2009. She was later part of a merge with males from the Shiyane pack (from the iMfolozi side of the park) to form the Crossroads pack. By mid-2012 she was again showing signs of wanderlust. Usually taking her travel companion Solo with her, they would separate from the pack, sometimes for a week or more.

During this period the Crossroads pack denned in the Mansiya valley below Hilltop Resort and the alpha female, Fossey, took a battering during an incident in which she lost most of her lower lip. Shortly thereafter the pack was mobile again, without the pups which had presumably died or been killed at some point. Despite optimism over a pregnant beta female in the pack this was also short lived as soon thereafter she also lost her pregnancy. It appeared to be quite a tumultuous period. 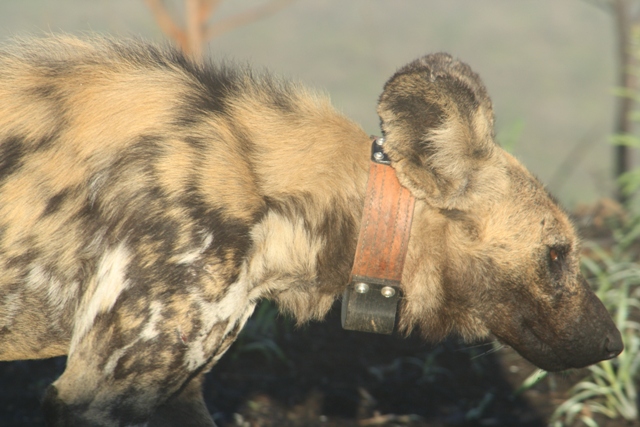 Norma with her collar

In August 2012 I reported on splintering of some of the packs in Hluhluwe-iMfolozi Park. At the time males from the iMfolozi side’s Ume pack (which had incidentally split off from the pack after the denning alpha female died; her collar was found chewed up about 3 km from the den location) had moved north and met with females from the Crossroad’s pack in the Hluhluwe side. The females in question were Solo and Norma. As it turns out this was a temporary liaison and the single-sex groups parted company. In early September, Cathy, who had developed a serious soft spot for Norma, organised for Norma to be collared. On a bleak, raining day, with the Ezemvelo KZN Wildlife Honorary Officer veterinarian we fitted the collar on Norma. Within several weeks Norma had started heading out on her own until her signal disappeared in November. Over the past week it appears the Crossroads pack may well have denned again. The wheel continues to turn. 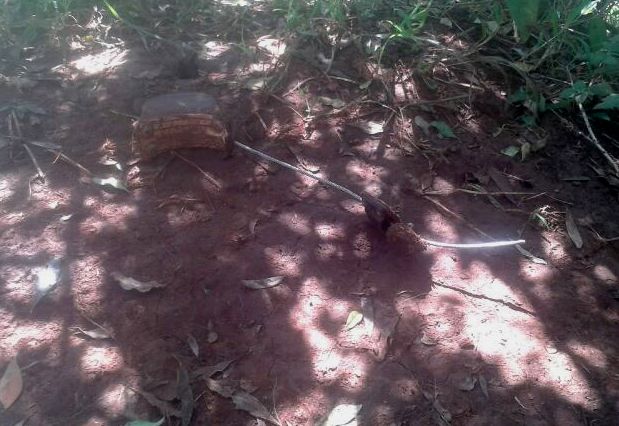 If any readers observe Wild Dogs outside of protected areas, please note the location of the sighting, whether the animal is wearing a tracking collar and identify, or ideally, photograph any characteristic markings. Please notify Brendan Whittington-Jones on 072 992 9483.