Collaring and wildlife monitoring are a foundation of managing animal populations and provide a number of inputs into sustaining wildlife parks. Any park ecosystem has a defined carrying capacity for different types of animals. Data on animal numbers, behavior, and health inform an analysis of the conditions in an ecosystem and of the opportunities and threats faced by any one species and its individuals. The professional work starts deep in the bush where animals and nature can at once define, dictate, frustrate, and reward the efforts of conservationists. A week in Zululand gave us a thrilling excursion into this professional reality, where darting lions featured on the priority list of urgent work to be done.

It was already looking like a long night ahead. We returned to the spot down a long and winding path through the bush, where the night before, during a 2 hour stakeout, we had failed to lure the lionesses with a fresh carcass of bait. They were a lone pair in need of radio collars and each day that passed without a successful darting was costing us precious time. Wildlife ACT co-founders Jo and Chris dragged the now-stinking remains off the truck, chained it to the tree again, and hemmed it in with thorns and brush.

After one last bush run to track some wild dogs, we returned after dark and readied the audio device, for over an hour sending a stream of wildebeest calls into the pitch black night. We eventually spotted the pair across the clearing with the night vision viewer, totally disinterested, and frustratingly, refusing even to come over for a look. After receiving a call from the Wildlife ACT monitors alerting us of lion movement in another section of the reserve, we decided to load up the bait and speed off. By then it was already pushing 10pm, and we needed to show something for several days of work and get a few of these collars deployed. 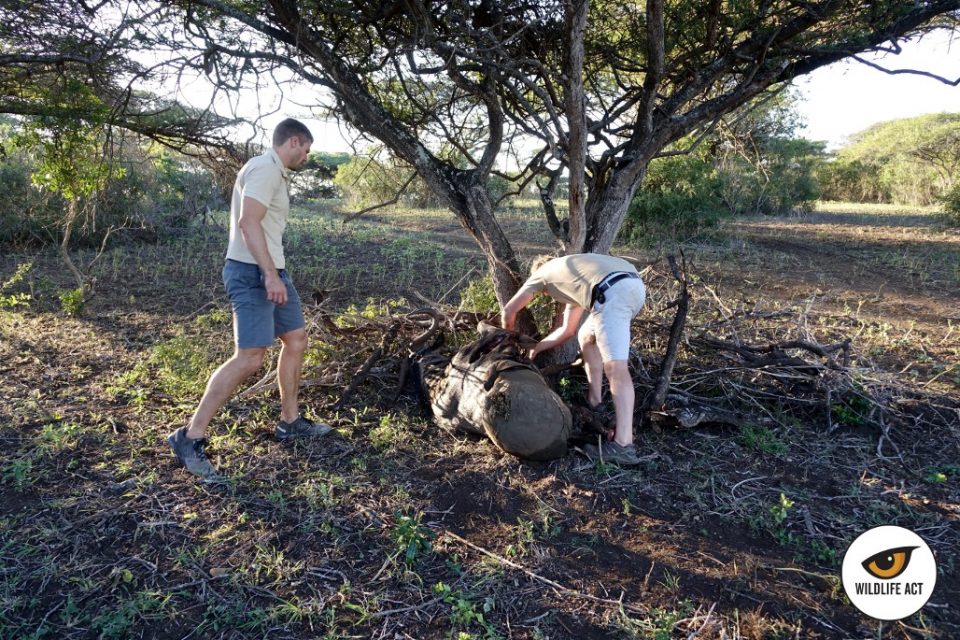 Chaining up the bait and creating a backstop of brush and thorns, to keep the animals facing the vehicle while darting.

Another pride picked up on radio: After tracking the signals, we spotted the pride crossing the road about 70 meters away. The spotlight I had carelessly flashed in their eyes didn’t distract them much – they were curious, and hungry. The scent of the dead flesh quickly drew them in pursuit. A male and female headed straight for the vehicle – we had them hooked. But now we needed to spin around and get far enough ahead of them to plant the bait, get into position, load the darts, and wait for them to catch up.

We lost them momentarily and stopped for a quick telemetry check. No sooner had Chris pulled out the radio than the male appeared from the brush right behind us – he would have jumped the truck had our reflexes been any slower! The pair then split and flanked, running into thickets on either side of us. We motored faster down the road about a kilometer further, hoping that would give us enough time to lay the bait. We chained up the carcass on the side of the road and jumped back in the truck, aiming to move about 50 meters away and wait quietly for the pride to find us. It was now running past 11pm. This had to work if we were to get anything done that night. 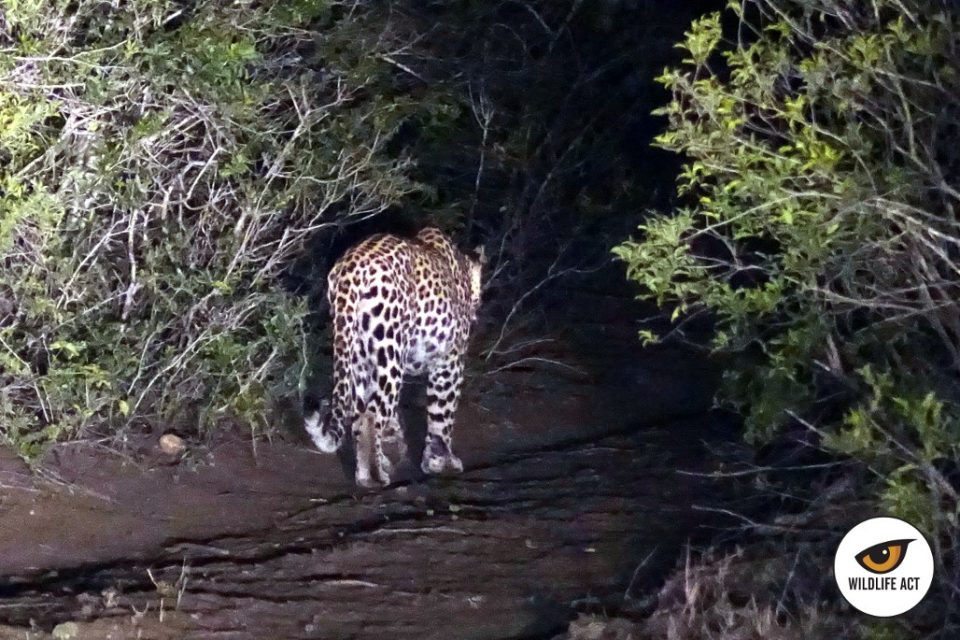 The leopard that was watching us trying to lure the lionesses eventually lost interest too.

“Oh please not now” one of us muttered. A herd of elephants in our headlamps, with calves and irritable mothers, was crossing the road about 50 meters ahead. Just what we didn’t need. The elephants looped around our stakeout, their senses picking up on the lions. Maternal defenses kicked in. Two of the large ones approached the pride, trumpeting and lunging their tusks forward, causing the lions to scatter. They didn’t appear to like our vehicle very much either and sent us warnings from a distance on our flank. For the next 20 minutes it was cat and mouse, with the elephants lunging, lions jumping away, then elephants retreating, and lions clawing back at the carcass, and then the elephants having another go, over and again. 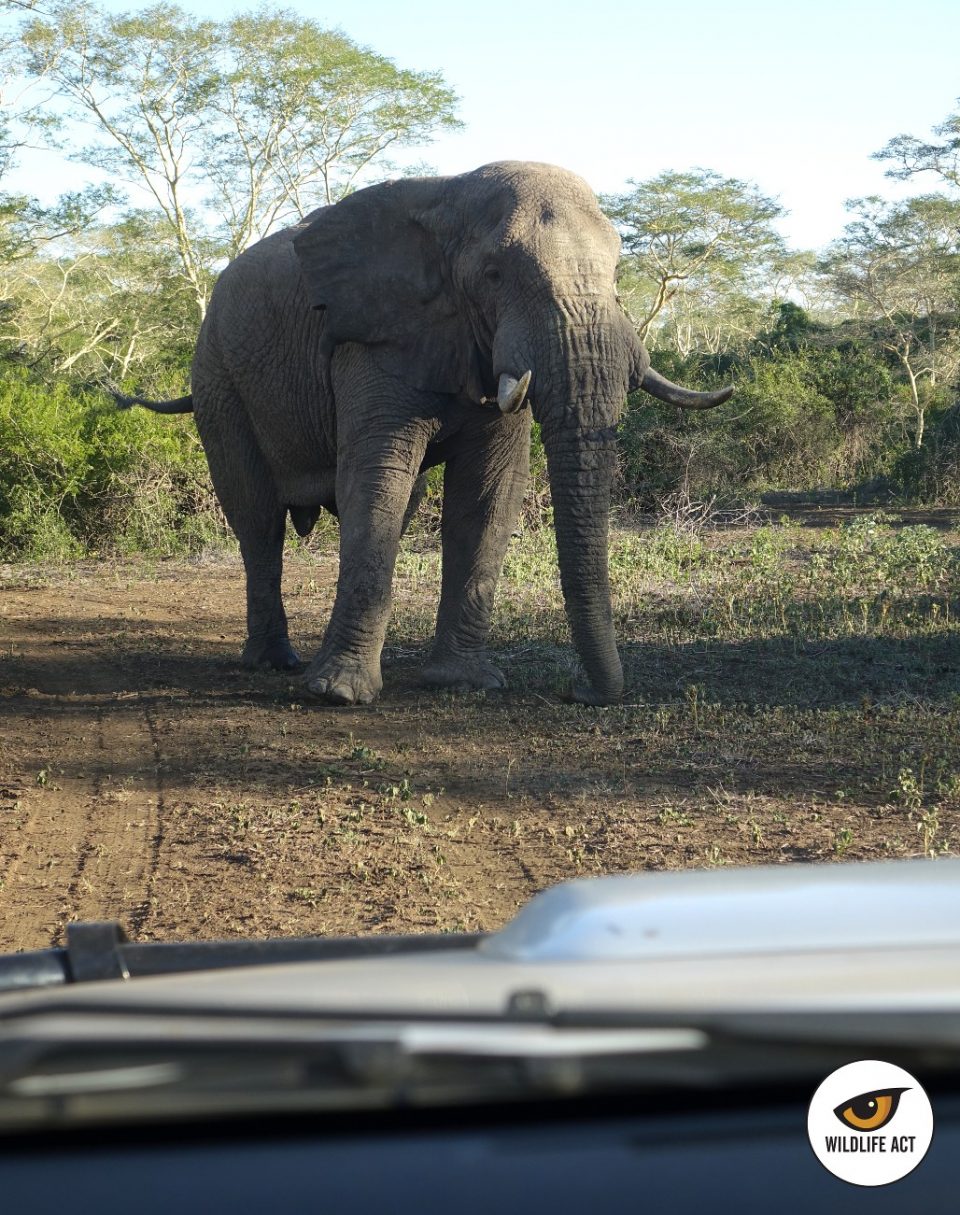 We had already been delayed earlier in the evening by a prolonged game of chicken on the back-roads with this grumpy bull.

DARTING LIONS IN THE DARKNESS

Finally, at midnight, with the baby elephants now wandering further away, the two large mothers calmed down and relented. The herd looped in a semi-circle around us, back across the road, fortuitously before the lions had devoured all of the bait. There was still time. We drew the dart guns into position and pulled up next to the pride. The two lionesses were darted in succession; it took longer to get the male in a favorable position – he became skittish, and the three cubs were causing a distraction. But once the third dart hit the male it was quickly down to business. The first lion was darted at 11:50pm, the third at 10 past midnight. We marked time as the guys sprang to work. The elephants were now across the road but still refusing to go away. Using the spotlight to scan the perimeter, we watched for intruders while Chris and Jacques collared the first two adults. 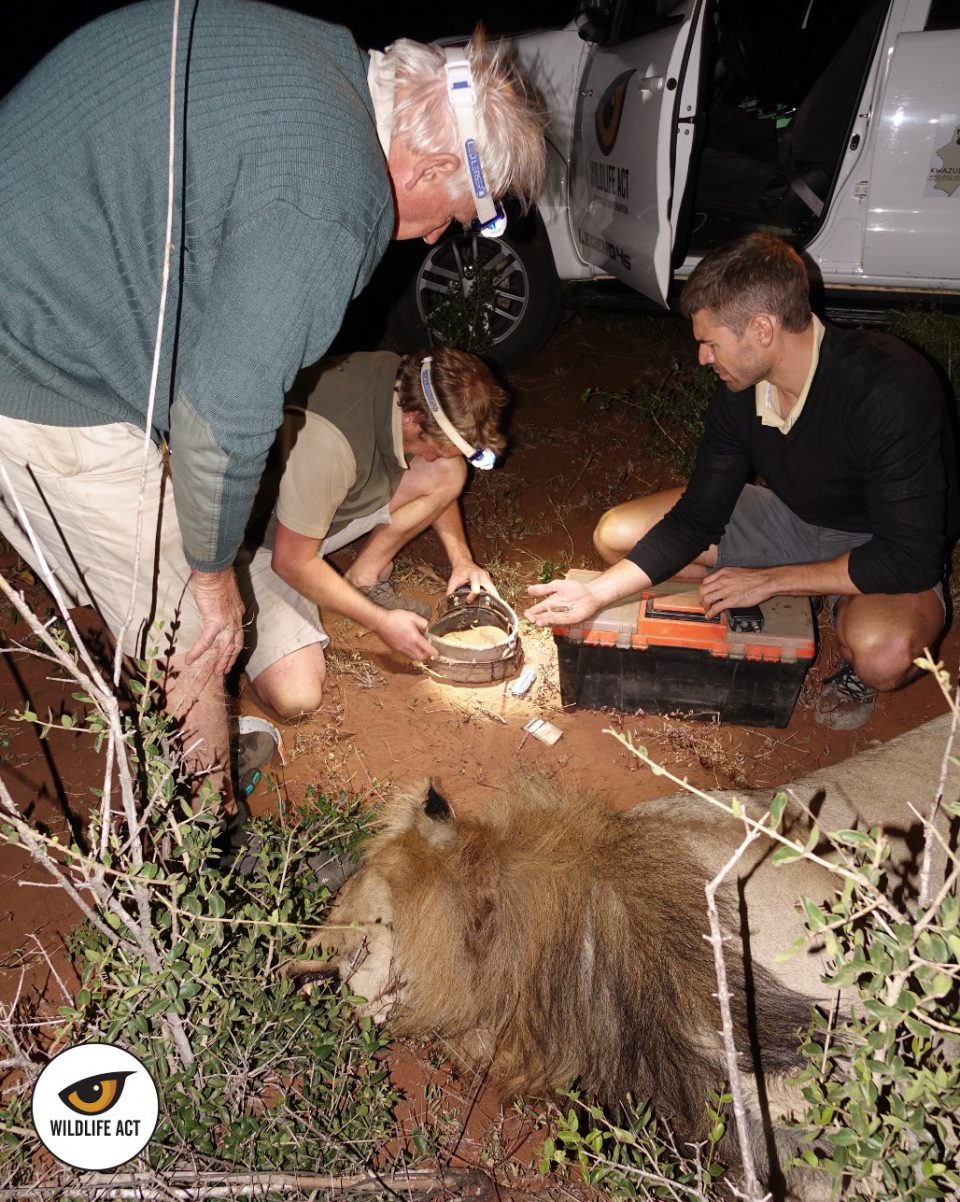 The three hands worked fast on the third adult as the one-hour-since-darting mark was approaching on the first lioness. 12:45 am. All in a night’s work.

When darting multiple animals at once it becomes a race against the clock. After an hour the tranquilizer would begin wearing off, so the male had to be finished before the first lioness started coming to. Like clockwork we finished off the male’s collar at 12:45, ran back to the first lioness and injected the antidote, and then completed the jabs on the others. We retreated quickly to the truck and counted away the 5 minutes for the antidote to take effect. By shortly after 1am all three adults had gotten back on their feet. The cubs returned from hiding under a bush, and the pride ambled off into the darkness. With no more elephants blocking the road, we returned to camp and toasted a night’s work well done. 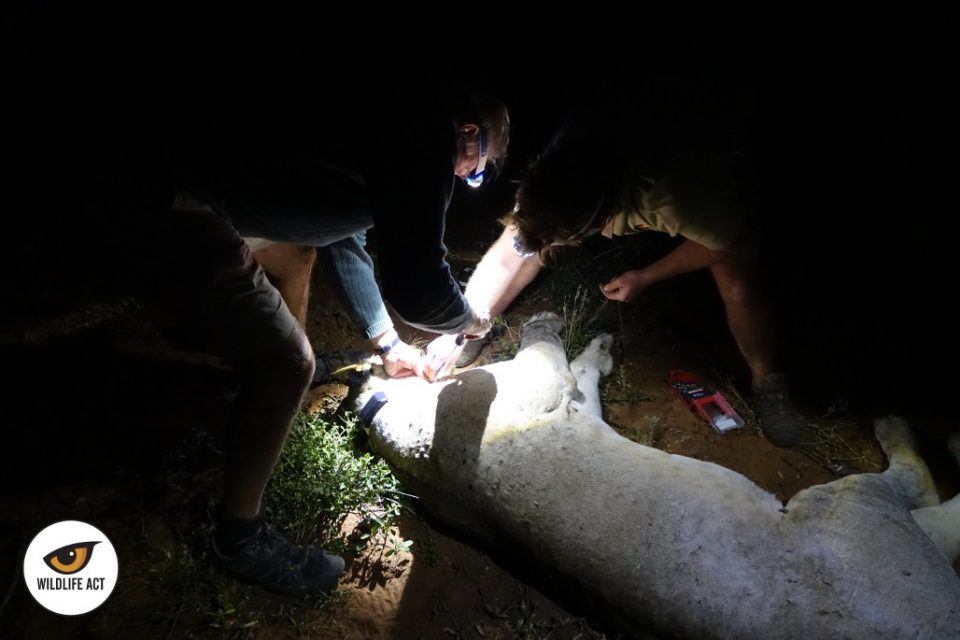 Actual lighting when working in the darkness with headlamps – concentration is a virtue.