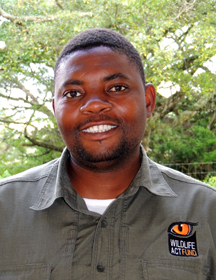 “Thokozani Mlambo is an extraordinarily motivated endangered species conservationist. As a Community Conservation Liason with Wildlife ACT, he works tirelessly, rarely taking days off, to spread the conservation word through his sprawling community of KwaJobe, which sits on the border of Mkhuze Game Reserve.” – Bruce Lombardo, Director, The Sindisa Fund

Mkhuze Game Reserve is in particular need of intensive conservation. Human-wildlife conflict and the poverty-stricken local community result in high levels of poaching incidences. Leopards and hyenas kill goats and calves. Hippos and bush pigs destroy crops. Yet villagers are not allowed to legally hunt on their former land, or even their current tribal land, not even to defend their crops and livestock.

Earning the trust of such an unfairly treated community takes great dedication, diplomacy and respect. Thokozani’s many years of service to the community through Wildlife ACT Fund and the Endangered Wildlife Trust before that, has not only earned him the trust of his community, but their respect and admiration.

There is no one more deserving of a Conservation Hero Award than Thokozani Mlambo. Some of his achievements include:

We wish to thank Thokozani Mlambo for everything that he has done. The time and dedication that he puts into conservation deserves much applause. We are honoured that he has been deservedly hailed as a Disney Conservation Fund 2015 Conservation Hero!

The Disney Conservation Fund focuses on protecting wildlife and connecting kids and families with nature. Since 2004, Disney has honored more than 100 Conservation Heroes from around the world for their extraordinary conservation efforts. The award recognizes local citizens for their efforts to protect wildlife and wild places and engage communities in conservation. Recipients from around the world were nominated by nonprofit environmental organizations, and each honoree and his or her nominating organization will share a $1,500 award from the fund.