At Zululand Rhino Reserve (ZRR) we, the wildlife volunteers, had the amazing experience of being just a few metres away from a pride of six lions, having just killed three juvenile warthogs. The experience was thrilling, in the good and the scary way. 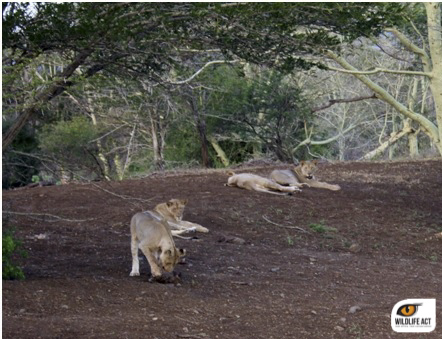 What we most enjoy, was driving up to the boma (enclosure) each morning and evening to check on the pack of six wild dogs on ZRR. Suddenly seeing their big round mouse-like ears pop up from beneath the tall grass and the “twittering” sounds they make when excited (see below for explanation). Still now, over a week later, it makes us laugh! We have surprisingly become somewhat attached to them by observing them each day, though still acknowledging that they are wild animals and should be respected and treated that way. 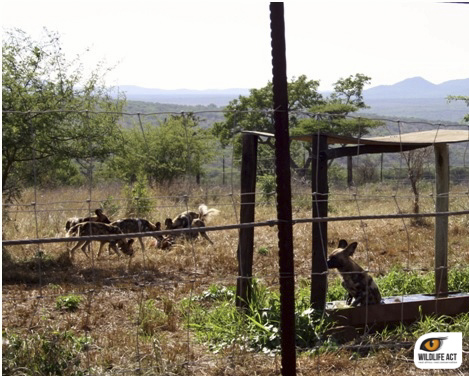 The African wild dog has been classifed among the most social of all canids. The study of vocal communication has lagged behind other scientific concerns in this socially complex carnivore. Its vocal repertoire is one of the most complex in Canidae, with some sounds unique to the species. The mixing of different sound types is also found in this species and is used to express ambivalence. Vocalizations provide a useful window on larger patterns of behavior, particularly among social canids. Short-range vocal communication accompanies many social interactions and appears to play an important role in intra- and interpack dynamics, and in forming and maintaining social bonds between pack members. Depending upon the motivational state and level of arousal of pack members, sounds issued by individuals can give rise to cascading group effects.

Preceding a hunt, pack members often rally in a greeting ceremony. The onset of the greeting ceremony is frequently initiated by a single dog running up to another one with head shoulder height, mouth agape, and ears folded back. Muzzle-to-muzzle contact is an important feature of the ceremony. Such contact, including lip licking and biting, appears to be a symbolic solicitation for food. Greeting behavior in adults might have developed from infantile begging. During the ceremony many different kinds of sounds can be heard including whines, whimpers, squeals, and high-pitched bird-like sounds called “twitters.”

Wild dogs hunt primarily in the early morning or at dusk. When filtering through bush in search of prey, pack members frequently become separated and sometimes call to reunite. Long distance contact calls are common in canids and assume the form of either pulsed trains or long acoustic streams. Wild dogs issue the former kind of call. These sounds known as “hoos” are low-pitched and short, and given in bouts of varying length and intensity. They are delivered with the head held slightly lower than the shoulders, a gaping mouth, and often on the run. In contrast, wolves howl. These latter sounds are issued in long acoustic streams by lifting the muzzle while stationary.