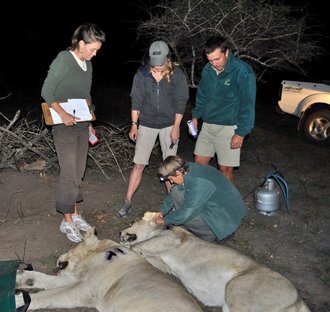 This past weekend, Wildlife ACT, the wildlife volunteers and KZN Wildlife staff dedicated their time to complete the much needed lion work on Tembe Game Reserve: Many of the adult cats needed to be re-collared, some of the females needed to be contracepted, and some of the youngsters that needed to be branded, micro-chipped, photographed and officially added to the records. What follows is the story of 4 days of hard work, long nights, and a lot of lion action!

The preparation that goes into a lion call-up is essential. First, we have to find an appropriate sites: An adequately open area to allow for safety when working on the darted animals (lions love sneaking around bushes in the dark), a sturdy tree to chain the bait to, and of course, one which is close enough to the lions for them to hear the call-ups being played through the speakers and for them to smell the bait. Once we find an appropriate site, we prepare the space by clearing it of smaller bush to make for easier darting. A wall of thorn tree branches are then packed around the back of the ‘bait tree’ to create a funnel: This forces the lion to eat with their rumps facing the vet and his dart gun, a technique known as brush packing. Finally, the bait (usually a Nyala or Impala) is chained to the tree in front of the brush packing. We then star with the call-up: This entails playing a recording of the squealing pig, a struggling buffalo, or the roar of a male lion over the loud speakers placed close to the “bait tree”. Then, we wait…

On the first night, four inquisitive sub-adults came to investigate the scene and were happy to find dinner prepared for them…..tied to a tree. But there’s nothing like a free meal, and as they started feeding they were quickly darted. The drugs took only a few minutes to knock the big cats out, and the whole team started to get to work. The youngsters were all micro-chipped, branded and photographed, before the vet administered the reversal drug to wake them up.

Saturday night also saw the preparation of two sites; one intended for an adult female and her 3 sub-adult cubs, the other for Tembe, the big male of the reserve. The mother and her cubs soon arrived 40 minutes after we started with the call-up the first site. Two out of the three cubs were darted, with the third too far away to allow for a clear shot. Soon after the cubs went down, the mother arrived. She was promptly darted and the work began. The sub-adults bubs were micro-chipped and branded and the vet contracepted the female. but try as we might,Tembe the lion king, was nowhere to be found.

For Sunday nights darting, Tembe and his female entourage became priority number one on our “To Do List”. The call-up was executed with text book precision. After nearly an hour of calling the lions came strolling in… happy to discover a meal waiting. Within 20 minutes 7 lions had been darted; 2 adult females, Tembe and 4 sub-adult males that until then had not been recorded. With all of the subjects asleep, the whole team quickly got to work, racing against the drugs keeping the cats asleep. As we were working, an alert volunteer saw eyes in the distance which could only mean one thing, there was another lion close by: awake, intrigued and heading our way. Within seconds everybody was back in the vehicles. A few minutes later the lion entered the scene – a sub-adult female. As soon as she was close enough, she too was darted and the work was allowed to continue… Eight lions were successfully darted and worked on before 9PM – priceless!

The work done over the weekend forms an important part of the Lion conservation efforts on the reserve. Wildlife ACT and the wildlife volunteers will be monitoring these lions intensively over the next few months. The data collected will allow reserve staff to make effective management decisions to ensure the healthy, balanced ecosystem.