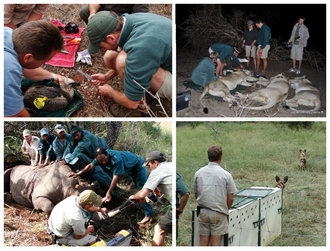 Over the past year Wildlife ACT has achieved some great results. We are an agile and experienced team, able to effectively contribute to conservation where it is needed most, and the numerous conservation volunteers who have joined us through the course of the year have participated in important endangered species conservation work while having the experience of a lifetime. Here is a summary of what our team has achieved together this year:

African Wild Dog population estimates in South Africa stands at a meagre 400 individuals. During 2010, Wildlife ACT assisted with the relocation and reintroduction of 26 Wild Dogs in the Zululand corridor, and the relocation of 6 Wild Dogs that dispersed from Hluhluwe-iMfolozi Park. We assisted with the feeding of three packs of Wild Dogs that were held in bomas before being released, as well as aiding with the maintenance of the bomas. We built an underground den site for a pack of Wild Dogs on Tembe Park, where they successfully had a litter of 5 pups.
A total of 20 African Wild Dogs have been collared this year, and we are now actively helping to monitor 135 African Wild Dogs, which represents one third of South Africa’s entire African Wild Dog population. In addition to this, we are also designing and testing anti-snare collars in a fight to curb the high incidence of Wild Dog mortalities through snaring.

Wildlife ACT assisted with reintroduction and post-release monitoring of more than 40 Black Rhino from or onto reserves in the Zululand area. Transmitters were fitted into cavities drilled into each rhino’s horn, following which each rhino was closely monitored after being released into their new homes. We also assisted with the removal of poachers’ snares on 5 Rhino, and the identity notching of 3 Rhino.

Wildlife ACT also accompanied Ezemvelo KZN Wildlife staff and members of Endangered Wildlife Trust (EWT) as they visited vulture nesting sites to tag vulture chicks with patagial (wing) tags, which allow for the collection of valuable data including monitoring of breeding success, foraging distances, etc. A total of 3 Lappetfaced and 4 Whitebacked vulture chicks were successfully tagged in this year’s ringing project. More than 50 vultures have been tagged in Mkhuze, HiP and Pongola since 2005.

In August 2010, Wildlife ACT initiated a first-of-its-kind wildlife survey using motion-activated digital cameras. The aim of the project is to accurately assess and study the Black Rhino, as well as Leopard and Cheetah populations on Hluhluwe-iMfolozi Park. Photographs captured of the animals are used to identify individuals through spot patterns on the cats, and ear notch-markings or scars on Black Rhino. The research will also provide insights into movement patterns and densities within specific habitats, and will help park management make effective conservation decisions.

The Wildlife ACT team wishes you a very happy and peaceful new year, and we look forward to more exciting conservation work together with our wildlife volunteers in 2011!