Each individual lion is identifiable from the unique lion whisker spots found on each side of the face. Other characteristics such as ear tears, facial shapes and scars are useful too, however, lion whisker spots are one certainty that generally remains unchanged throughout a lion’s life. Another handy identification tool is their side profile, although with age (and especially for males) this needs to be updated more frequently. 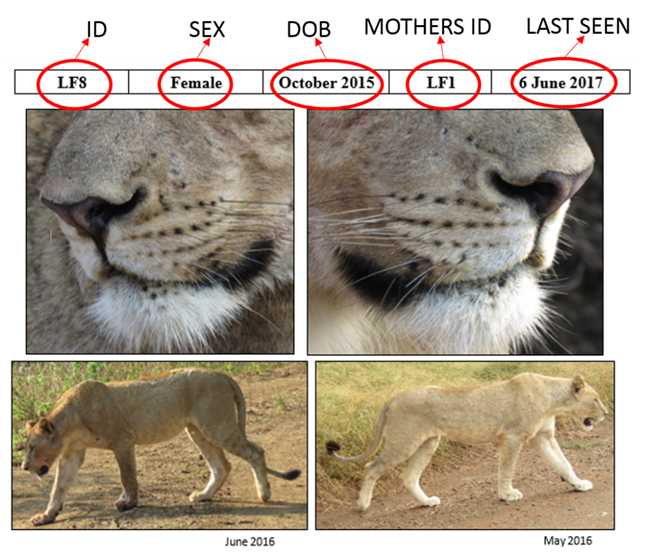 This is where the help of volunteers comes in very handy! Capturing these photos while your conservation monitor drives and maneuvers position enables the team to gather all the important information needed before regrouping back at camp to identify the individuals and update the lion identity kits for reserve management.

The lion whisker spots in the ID photos above were documented when the Wildlife ACT Team on Manyoni Private Game Reserve were able to obtain a high-quality visuals of five young sub-adult lions who had recently separated from their mother and become independent. Young lions of both sexes remain in their birth pride for around 2 years, at which stage they should be able to hunt successfully on their own.

In this case, these 5 youngsters (one sub-adult male and four sub-adult females), roughly 20 months old, remained together after separating from their mother. Due to their rapid growth rate and stealthy movements, the Wildlife ACT Team were not immediately able to get photos good enough to update their identity kit photos – one of the very important roles the Wildlife ACT team plays on the reserve.

But patience is key! Two hours after first locating them, the wait was worth it. Out from the thick bushes they came and one by one they walked past the vehicle, allowing us to get perfect shots of their side profiles, before these lions headed off towards the watering hole to drink.