Last week our conservation volunteers assisted with putting a GPS collar on ‘Albie’ in Tembe Elephant Park. The Tembe Honorary Officers raised money from various donors, including Wildlife ACT Fund, for a GPS collar for the Tembe pack of African Wild Dogs.

The pack currently consists of:

The decision was made to put the new GPS collar on Albie, since it is better not to interfere with the alpha pair when puppies are in the mix.Wildlife ACT conservation volunteers watched in awe from a slight distance away (so as not to make the dogs feel boxed in) as the wild dogs first responded to the call-up. 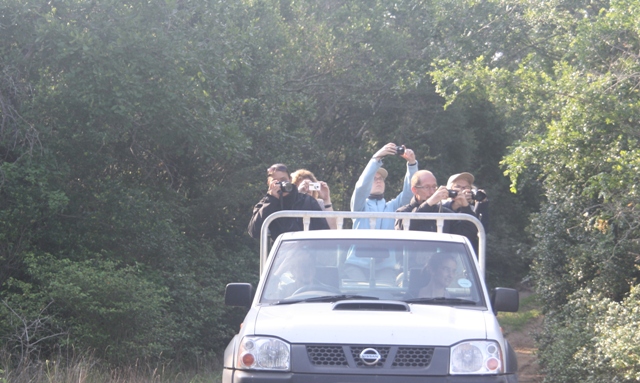 Volunteers watch from the vehicle

The three adults arrived, and Albie investigated the bait, which was chained to a vehicle, while the alpha pair stayed a safe distance away. Although she tugged at the bait a few times, Albie did not stay still for long enough to be darted. She then suddenly ran off with the other two adults, leaving the rest of us wondering if the call-up had just been shut down!

A few minutes later, however, they returned with the six puppies – long, lanky legs and enormous ears distinguishing them from the adults. The puppies played in the open area next to the road, fighting over some bones that had been left over from an old carcass. The adults lay in the road, directly behind the vet’s car (in a position that did not allow for darting) and attentively watched the little ones – every few minutes one of the alpha pair would stand up in a perfect show-dog-type pose on the edge of the open area, and look closely at the puppies while carefully sniffing the air all around.

After quite some time (bearing in mind that minutes feel like hours in such situations) Albie, no longer able to resist, returned to the bait. Again she tugged at it a few times, managing to sneak off a few mouthfuls in the process. The vet, Birgit, was somehow able to line up the dart gun during Albie’s attempts to remove the bait from its chains, and let off a dart. At the pertinent moment, unfortunately, Albie flicked her tail and the dart realigned to land in her tail instead of the intended rump. Albie’s first reaction was to get the dart out, and she unceremoniously rubbed her rear along the sand road, with her tail high up in the air. After a few unsuccessful attempts, she bolted off into the thick forest surrounding the open area, closely followed by the rest of the pack. 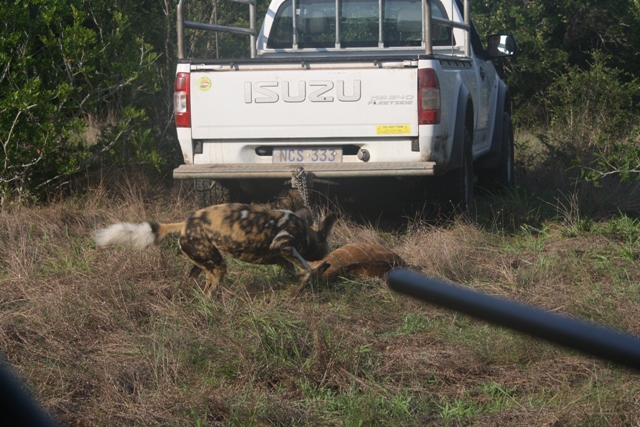 Albie at the bait

Unable to physically pursue them, we followed the radio signals emitted from their collars, using telemetry equipment. More than an hour later, we were able to ascertain that the dogs had decided to rest up in the middle of a large block of thick forest. It was evident that none of the liquid in the syringe had entered Albie’s body – she had been active the entire time (her collar had been emitting movement signals), and the drugs would have taken effect in under 10 minutes. Since it was approaching the insane heat of midday, and there was nothing further we could do until later in the day, we returned to the camp.

We began searching again for the dogs at 16h00, and picked up their signals from the same area in which they had rested during the afternoon. They got up and started moving at about 17h00 – to our disbelief, they seemed to be heading back to where we had been in the morning. Clinton Wright, the Wildlife ACT Monitor at Tembe, went ahead of everyone else, and set up the bait in the open area (as we had done in the morning). We waited patiently for Clinton to let us know that we could move in slowly, hoping that the dogs would start feeding on the bait and be more relaxed once we got there.

Although they did not appear to be overly perturbed by us, the wild dogs were hesitant to feed on the bait – perhaps a déjà-vu situation from earlier in the day. With a little patience and perseverance, Birgit was eventually able to dart Albie – with a perfect rump shot. That ended up being the easy part of the process, as Albie decided once again to bolt off into the thick forest (this time with two darts in her – the latest dart together with the tail dart from earlier).

Waiting the eight or so minutes for the drugs to take effect seemed like an eternity. And then the search was on – some of us headed into the thick forest to locate Albie, while the rest of us stayed near the bait (hoping that the other members of the pack would return to eat). We knew that Albie had to be found within an hour of being darted, as the drugs lose their effect thereafter. The idea of her running around with two darts in her was an extra concern, and made locating her even more imperative. The odds, however, were largely stacked against us – the thick forest severely hampered the accuracy of the signal we received on our telemetry equipment and had us running around in circles, the sun was going down and made visibility in the forest extremely poor, navigating through the mass of creepers and bushes slowed us down substantially, the abundant leaf litter and the arrangement of the forest flora gave Albie the opportunity to lie on her side and completely disappear from our sight, and most importantly we were running out of time to reach her before the pertinent hour was up!

Miraculously, Birgit saw Albie move her head at the 59th minute, and was able to scramble over to her and administer a top-up before Albie had the chance to run away. It was a heart-stopping moment! The team of five within the forest worked efficiently and speedily to change the collar and do all the necessary medical tasks, by the light of Clint’s head-torch. For the first time that day, all ran smoothly. And then the madness began anew. The decision was made to carry Albie out of the thick forest, and place her in the open area where the process had first started. Easier said than done, as we were once again faced with the challenge of navigating through the tangled vegetation in the dark, with only a head-torch to light our way to an uncertain destination, trying hard to carry our extra passenger as gently as possible. We eventually found our way to the road, through persistently calling to the team that had remained there and using their voices to guide us in the darkness.

Being able to finally extricate ourselves and Albie from the tangled, pitch black, humid forest was an immense relief! We placed Albie gently on the grass of the open area and took a few quick photos. 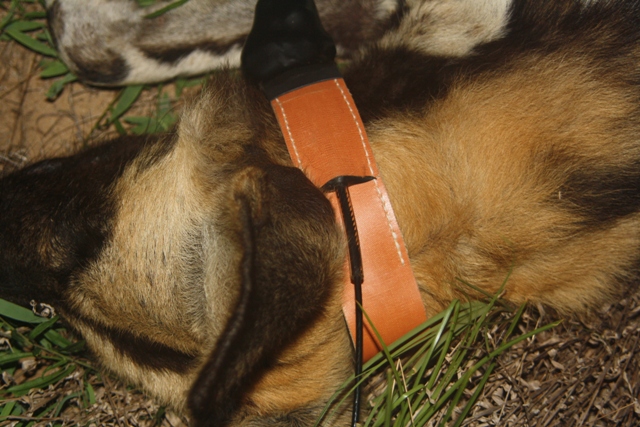 Birgit administered the reversal drug, and we all ran to our vehicles and went immediately silent. Within a minute, Albie had jumped up from the ground, and run off in the direction taken earlier by the other members of the pack.

Ecstasy and exhaustion hit everyone at that moment – what an intense adventure! A true reminder that “this is Zululand, not Disneyland”!

Albie joined up with the rest of the pack early the next morning, and her new GPS collar is working perfectly! Two days after her ordeal, she lay next to the monitoring vehicle as if nothing had ever happened! A happy ending to an unforgettable day! Thank you to all involved from Wildlife ACT and Ezemvelo KwaZulu-Natal Wildlife.

To donate towards a GPS collar, visit our secure GivenGain project page.