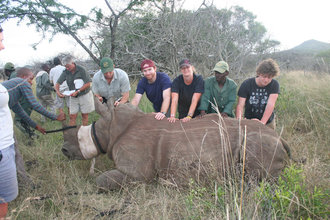 During the course of this year our Wildlife ACT team and conservation volunteers assisted with the capture of 3 Black Rhino, some of which were airlifted by helicopter out of inaccessible areas of the reserves. Each Black Rhino had a transmitter fitted in the rhino’s horn, and their “toenails” were filed with notches to allow individual identification for future data collection through monitoring.

Our team also assisted with the capture of 7 White Rhino this year (5 on Hluhluwe-iMfolozi Park (HiP), and 2 on Thanda Private Game Reserve), as well as participating in the ear-notching of 1 White Rhino for future identification. Our volunteers also assisted with collecting as many species of ticks as possible from the rhino for a future study, and witnessed the release of 9 White Rhino into new locations. We are privileged to be a part of the work being done to conserve these incredible animals.