During a recent iMfolozi monitoring session the wildlife volunteers and I met two park visitors who stopped us and handed over this feathery friend, a spotted eagle-owl.

They had found him lying next to the road and didn’t know what was wrong with him, so we gave him the front seat and as we drove he seemed to be okay and started to move around a little. When we got to camp I took him out of the car and he flew off, right as rain. We’re not sure what was wrong with him but we wish him well and our front seat is always available should he need a ride.

Spotted eagle-owls are very common in South Africa and can be found all over the country in rocky or well wooded areas. They rest during the day, hidden in rocky outcrops or in the thick foliage of tall trees. You can often see them at sunset or sunrise perched on telephone poles or fence posts along the roads. They perch there to find small rodents or reptiles that might have been hit by cars. Unfortunately when they come down onto the road surface to feed, they themselves become vulnerable to passing vehicles. 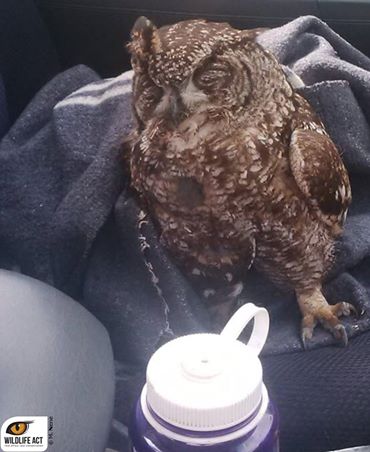