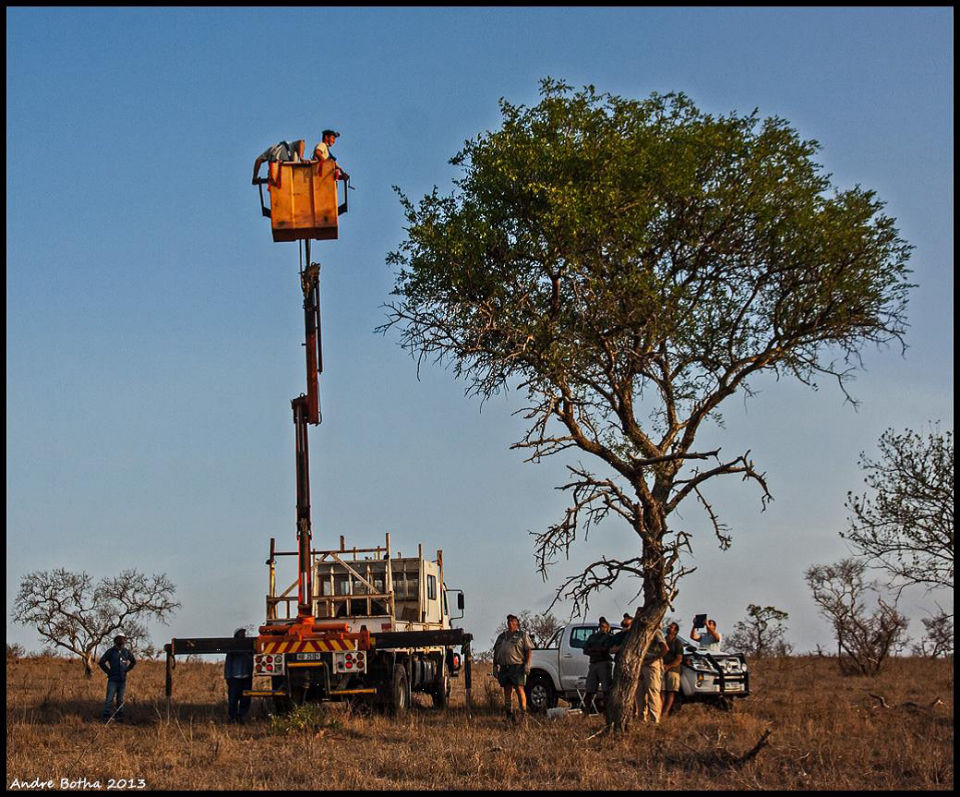 Three species of tree-nesting vulture have been the focus of fieldwork conducted as part of an overall strategy to study and conserve vultures in KwaZulu-Natal in three reserves and adjacent private properties in Zululand. This work has been conducted as a partnership between Ezemvelo KZN Wildlife, the Birds of Prey Programme of the Endangered Wildlife Trust and Wildlife ACT with support from Eskom, Raptor Rescue and private landowners since 2009. Work in this area was initiated in 2004 by James Wakelin from Ezemvelo KZN Wildlife which focused on monitoring vulture flight patterns and the colour-marking of birds using PVC rings. This report will focus on the activities and results of fieldwork conducted in this regard during 2013.

A mass-capture exercise was conducted at the Kempenfeldt Vulture Feeding Site near Dundee from the 10th – 12th of March 2013. Captures were made by means of the walk-in cage erected at the site by the owner, Mynhardt Sadie and was baited a few weeks prior to the capture being undertaken. Birds captured were fitted with N-series wing-tags and SAFRING metal rings while three birds were also fitted with GSM tracking units. This will allow us to track vulture flight patterns. The event was also used to train a number of Ezemvelo KZN Wildlife staff and other volunteers in mass-capture and to conduct wing-tagging and ringing of vultures.

Results – A total of 31 African White-backed Vultures Gyps africanus were captured and fitted with rings and wing-tags during this exercise. A total of 22 re-sightings of these tagged birds have been reported since March 2013. The map in Fig. 1 Indicates vulture flight patterns and the re-sighting records of all birds captured and tagged at Kempenfeldt to date. 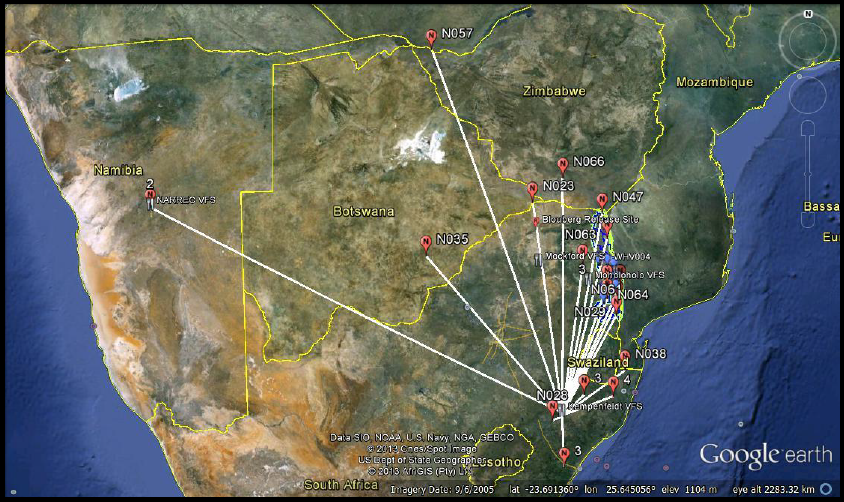 The three vultures fitted with GSM tracking units also produced excellent data with regard to vulture flight patterns and indicates that immature and sub-adults range widely in search of food while adult birds are more restricted in their movements, especially when breeding. The map in Fig. 2 reflects the movements of an immature bird during May 2013 and shows that the bird foraged across a significant part of Zululand, Swaziland and the Lowveld of Mpumalanga and Limpopo in South Africa. The vulture flight patterns of this particular bird has been repeated several times during the last 12 months. Fig. 3 however shows the more limited movements of an adult bird which indicates a more restricted movement pattern. This bird is likely breeding to the south of the iMfolozi Game Reserve. 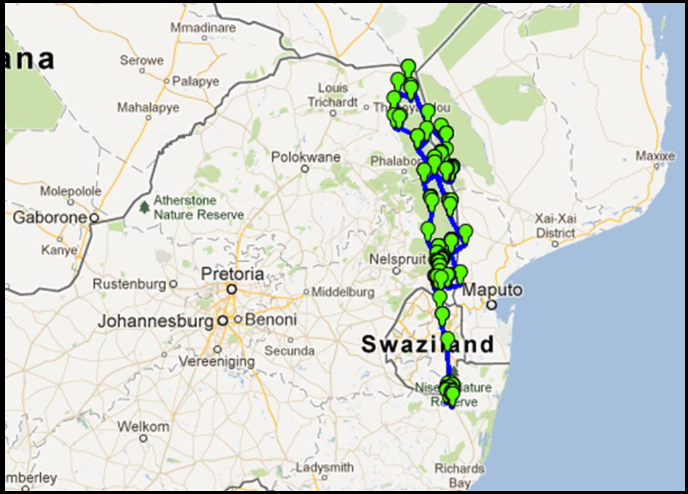 Fig. 2. Movements of a single immature African White-backed Vulture tagged at Kempenfeldt in a single month. 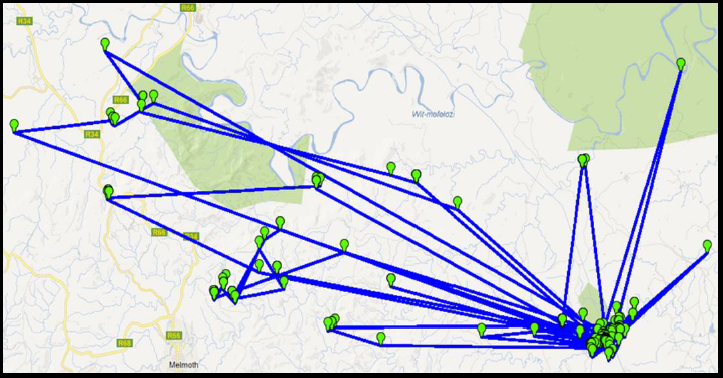 Fig. 3. Movements of an adult African White-backed Vulture during April-May 2013 at the onset of the breeding season clearly illustrating movements focused on the nest site in the bottom right corner of the map.

Wing tagging of vulture nestlings is conducted annually in the above mentioned Ezemvelo KZN Wildlife reserves as well as on the Zimanga Private Game Reserve. Each reserve has been allocated its own series of tags which facilitates easy identification of these birds in terms of their natal area after fledging. Vulture tagging is conducted according to the accepted protocol and blood samples are taken to determine the sex of nestlings. Access to nests in Hluhluwe-iMfolozi Park is acquired by using a qualified climber while Eskom assists with a cherry-picker truck for this purpose at Mkhuze and Phongolo Game Reserves.

Fourteen vultures and one Marabou Stork Leptoptilos crumeniferus were tagged in the three Zululand reserves during 2013 (Table 1). One African White-backed Vulture nestling was fitted with a metal ring only as it was considered too small for tagging at the time of our nest visit. A total of 72 re-sightings of vultures tagged in these reserves have been recorded since 2009 according to the Southern African Tagging Database.

GSM tracking units provided by Avi-Track have been fitted to eleven individual vultures of three species and a single Marabou Stork during 2013. Units are fitted using a back-pack harness constructed from Teflon ribbon which is lightweight and designed to fall off the bird within 3-5 years after fitting. The combined weight of both the tracking unit and harness falls well within the prescribed parameters for the species to which they are fitted. Vulture tracking data is transmitted using cellular phone technology and can be accessed via a dedicated website.

Two incidents during fieldwork again confirmed that the poisoning of vultures is by far the most serious threat faced by these birds. Fig. 4 Carcass of a poisoned African White-backed Vulture found dead and in an advanced state of decomposition in the Phongolo Game Reserve, October 2013. 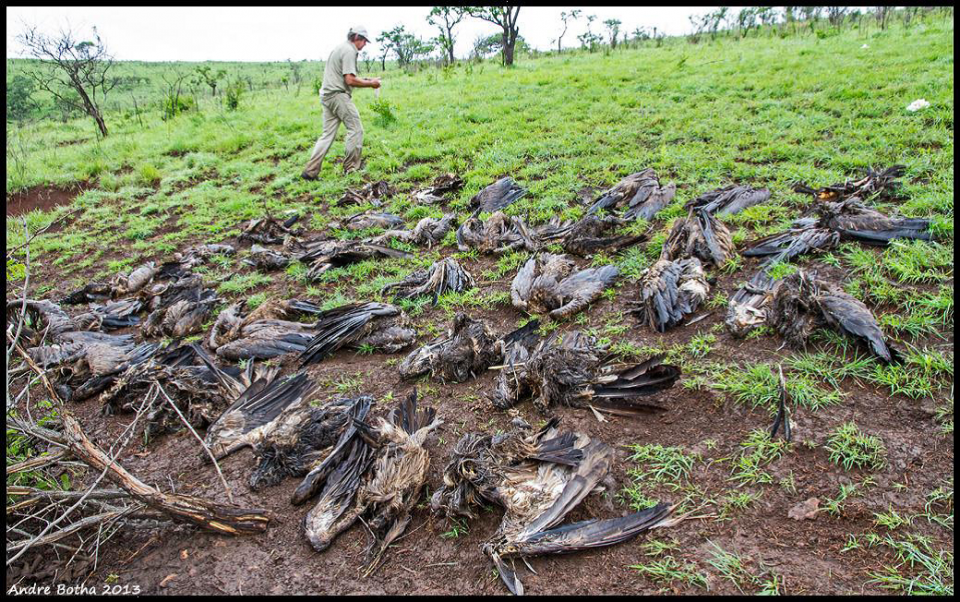 We are aware of the planned construction of a transmission line which will traverse areas in Zululand where vultures are known to breed. Concerns from landowners have been channeled to Eskom via the EWT’s Wildlife Energy Programme and these should be considered prior to a final decision on the route that this line will follow is made.

I would like to acknowledge and thank the following staff and Honorary Officers from Ezemvelo KZN Wildlife for their participation and support during fieldwork in 2013:

Apart from participating in fieldwork, Chris Kelly from Wildlife ACT was responsible for logistical arrangements and for sourcing substantial funding to cover fieldwork costs and to acquire tracking units to track vulture flight patterns.

Fanie van Jaarsveld and his staff from Eskom KZN OU are thanked for their assistance and the provision of the cherry-picker vehicle to access nests at Mkhuze and Phongolo.

Ben Hoffman is thanked for assisting with the fitting of tracking units to birds.

We would also like to thank Will Hunter for climbing to access nests in HiP during October and Helen Reilly from Australia for raising funds to cover the cost of some of the tracking units.